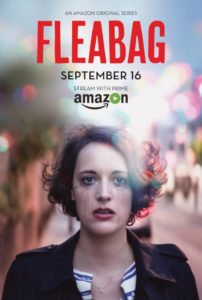 Welcome back to the finale of Fleabag, it's been getting slowly darker and darker, as things do before they're brought screaming into the light, rolling S1:E6 after the break

We open with Flea bouncing off a door pretending she's having a good time. Arsehole Guy really is funny, isn't he? You wouldn't think so, but he's very droll and his "look at me!!" while pounding away before turning her around so he can see "those tiny things" again.

She reminds herself to stay sexy

As round two and three happen very quickly but then (while she's grimacing) we lose wood. I repeat, Arsehole Guy has lost wood! Flea tells us it's because there's a point when you fall in love with someone when you lose an erection, because "all the blood rushes from your dick to your heart" and.... okay!

She wakes up to see a pencil, which makes her smile remembering telling Boo about an 11 year old boy being sent to Juvie for sticking pencils up a hamster's bum (sorry C!). Boo is holding Hilary and WHAT IS WRONG WITH YOU?

Boo can't believe they sent the boy away, he clearly needs help. Happy people don't do that. And that's why they put rubber ends on pencils anyway, not for hamster abuse, but rather because people make mistakes.

Arsehole Guy has indeed caught a case of the Feels, he doesn't usually connect with women (which is what Flea liked about him) but he needs to... tell her something after yoga. He needs the right words for her

SexHibition Time! All the cheek kissing later, we get this gem from Godmother "well clung-to" *eye switch towards Arsehole Guy. Godmother then slaps a "Here to Help" sticker on Flea (slightly harder than necessary) and hands her a tray full of glasses of champagne.

Godmother does a speech to open the SexHibition, her intent isn't to arouse everyone, but rather to remind everyone of the beauty of sex. After all, they're all here because of it: sex is life. Listening at the back (sticker gone, I'm not the only one who checked, right?) Flea flashes on a heartbroken Boo, sometimes sex brings death too.

This is going to be an extremely ooky exhibition to capture properly, what with a bidet as the first display and an empty platform as another. You see, her valuable artwork was stolen and that inspired A Woman Robbed, which is... nothing.

"Leave your genitals at the door and bring your mind to these pieces" and since my genitals have already retreated, I think I'm braced. Godmother concludes her speech revealing the true nature of her SexHibition, it's about power. I think sex is rather often about power, but in this specific case, it is a direct flex over our miserable Flea. *hard eye contact*

Damnit, the sticker is still on, and she's circulating with her tray while calling Claire. Arsehole Guy asks if it's weird that his mouth is watering in front of a massive wall of plaster-castered erect peni? Not at all, I think that's perfectly normal!

Godmother approaches, what does everyone think? Arsehole Guy loves it, Flea'd like it as "a rug with perks." It's very securely nailed to the wall this evening, has Flea found her father's junk yet?

WHAT IS WRONG WITH THIS WOMAN??

Flea's taken aback and then points at one, which dismays Godmother. Yeah, erp, that was the one

Flea is almost frantic in her calls to Claire now, she has to come, she's alone and doesn't know anyone here, but does she? There's a statue of Harry sans genitalia, and then the real Harry behind it. He's with a gorgeous young woman who does the age-old possession move

They have an awkward talk while new girlfriend Elaine (Kae Alexander) hugs Godmother across the room. Harry's as confused by the KenDoll statue as Flea is, where's his penis? Over on the wall, second from the left and we all looked, paused, looked again, right? All of us?

He's well and truly moved on, no wanking about her any more either and that seems the worst, somehow, because he isn't lying.

Claire finally makes it, but she's being weird, why is she being weird? Oh. Because Martin is with her, she didn't leave him after all. That must have been a Period Promise. They leave to do a quick whiz around as Godmother hands Flea yet another tray of glasses of champagne to bring around.

Flea's reached her breaking point, really good-looking rebound guy just dumped her BEFORE her ex and new girlfriend could see, having to stare at a likeness of her dad's erect genitilia, her sister acting weird: she takes that tray of glasses into the back and drinks them all, one after the other.

She pulls the sticker off and opens another bottle of champers, remembering drinking with Boo in the cafe. Things are about to go sharply downhill, starting with Godmother snapping her fingers at Flea to bring more drinks.

Flea's dad is all over her immediately, apologize and stop making a spectacle of herself! Flea apologizes to Godmother, sort of, while Godmother glares back at her before turning to Flea's dad to garner sympathy. Flea says what we're all thinking

Godmother twists the knife a little more, she's sorry Flea had to hear that, but she DID have to hear it. And now clean that up.

Flea's in the back, drunken bravado given way, when Claire comes rushing back: what the hell was that?? WHAT IS MARTIN DOING HERE?? Oh no oh no oh no Martin told Claire it was FLEA who made the first move and she doesn't believe Flea after what she did to Boo.

Oh no oh no the pants she was frantically undoing were the neighbour's pants and it was SHE who fcuked him and the reason why Boo walked into traffic and died. Flea doesn't know where to look, she can't look at Claire and Martin, she can't look at us, she can't look anywhere because she thinks it was her fault that glorious and good Boo died and she's still here.

We all do stupid things sometimes, it's not your fault.

She finds her dad crying outside, they share a smoke and talk about how they're not the same (he thinks they aren't, she knows they are) and how it's so very often fathers that are messed up by their daughters, not the other way around. He thinks her mother would have admired her little performance upstairs, does he ever think about her? As often as she thinks about Boo, which is all the time.

She apologizes, but then the dragon lady approacheth and the moment is gone. Flea wanders the streets crying while calling Boo's voicemail over and over. She makes it back to the cafe in time to feed Hillary and then steps out onto the street. Oh no oh no she's going to walk into traffic like Boo and just as she's gathered her nerve, the bank manager pulls up and asks "are you okay?"

*I completely lose my shit* break

Nobody's asked her, this whole time, not one person. They've yelled at her, made grudging allowances for her but nobody's once asked her if she's okay and she just is NOT.

He's looking around the cafe, ohhhh, he thought her cafe was FOR guinea pigs, not guinea pig themed and that's why he called her loan application funny. They talk for a bit and just before he makes a run for it, she gets it out.

She's fucked everything up, she's fucked her cafe into liquidation, her family, her friend's boyfriend and all she can think about is that her body is all she has left, she doesn't know what to do when she's old and unfuckable and the worst thing in the world is someone not wanting to fuck her, because she fucks everything.

Does everything feel like this? Or is she alone? Of course she's not alone and it's not funny, either. He goes, but then comes back in. "People make mistakes." He wants to redo their interview (this is probably good practice for him as well) and maybe it WAS funny that she runs a cafe for guinea pigs. We're out

This show has been a rollercoaster, such a visceral experience. I haven't always loved Flea, but I love how they showed how MESSY grief is, and how long it can last and all the things that go with that. People get bored of your grief, your self-destruction, your self-loathing, your inability to move on, no matter how charming or funny you try to make it and that's the worst part. I'm sorry, I hated Claire at the end, her abandonment of Flea for Martin and condemnation for Boo is inexcusable. I can't forgive Flea's dad, either, although I do realise we're never going to be happy with people our parents or children pick, especially if they're replacing someone we love. I can't forgive him for not protecting Flea from Godmother, who is pure evil in a hairscarf and Jesus sandals.

The part about being fuckable I don't think is specifically referencing being female in a patriarchal society; I think it is more about doing something to distract that you can keep detached from. Flea was always very much separate from sex, talking to us during, and random and indiscriminate sex can be another addiction. Hers was based in self-loathing and I would argue that she would not be alone in that either. It's the sort of thing people like to have opinions about, to cast judgement on and can be a lightning rod for conversation.

Thank you EB for recommending this show, it will stick with me.