Hi everyone, it's cold and snowy and gross and a great time to watch people sweatily bake their bums off in a hot tent in England! So let's get into the Great British Bake Off, where I'm sure we'll have a mad but lovely theme to take us through another week.

Last time we had a three-peat as Star Baker, with Steph Blackwell nabbing the top prize three weeks in a row. We lost the chatty and accomplished Priya O'Shea, but she did a great job: Top 7 in Britain! Let's find out what other dead weight we slough this episode! (I'M KIDDING)

Teacher Alice Fevronia didn't have much time to focus on practice bakes this week, it must be report card time as she had 150 reports to write. Woooo teachers (well, GOOD teachers, you know who you are) are worth their weight in gold even if they aren't paid nearly that much.

I think the theme is Festive Cooking? Maybe? It's very confusing.

Ahhhhh okay, it's Festival Week, hosts Sandi Toksvig and Noel Fielding introduce the signature challenge: 24 yeasted festival buns. Each bun must tell a story and I've got one for you: The Mythical Buns Signifying A Land Where Buns Mean Anything To Do With Festivals.

I think Steph is a good baker, I just find her stuff...boring. 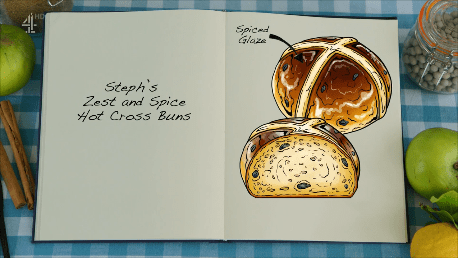 Alice has zested a mountain of lemon rind for her hot cross buns although blueberries seem to feature prominently. 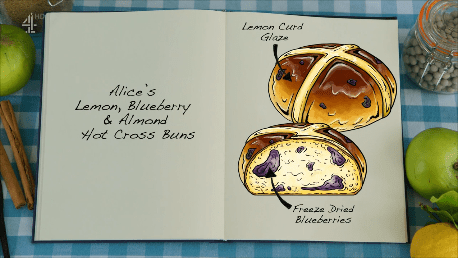 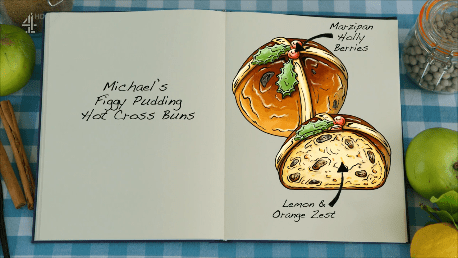 David Atherton is making a Bulgarian bun, which makes sense as he has a Bulgarian partner, family living in Bulgaria and a lovely bright shirt on today! 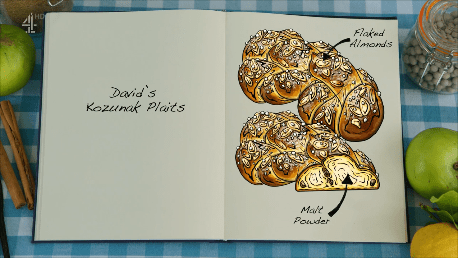 I think it's awesome that he's not doing hot cross buns like everyone else.

What IS this, young Henry Bird? What's a kardemumabullar? Can you really call Cinnamon Bun Day a festival? CAN YOU? 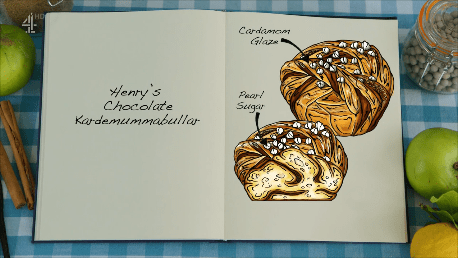 Noel makes fun of Henry never having been to a festival, yeah he's been to a book festival!!

Rosie Brandreth-Poynter is working on a Swedish bun wait, nope, she keeps saying "namalacca" or somefing but is making Mardi Gras Peacocks. 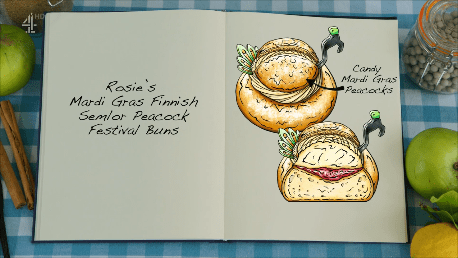 Noel and Sandi amuse themselves in the corner.

Oooh Henry's dough is LOVELY. Judge Prue Leith and Paul watch carefully as the baketestants mess with their buns, time call! One hour! Suddenly we're at half an hour and buns are baking all over the tent! Henry plays with a hackysack and bakers start removing their wares from the oven. Five minutes!

Hullo David, your buns look quite dark, I hope they aren't dry! Paul thinks they're a little dark too, but Prue compliments the texture. Paul is impressed! 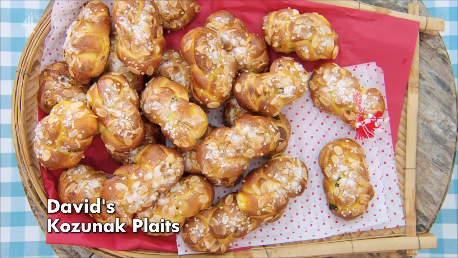 On to Michael and his dual festival buns, whose flavour is spot on but are not perfect looking. 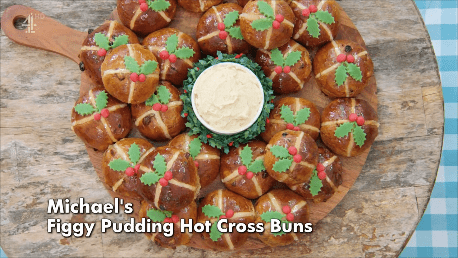 Steph's hot cross buns get her a Hollywood Handshake, which I woke up for. I'm sure her stuff is technically brilliant. 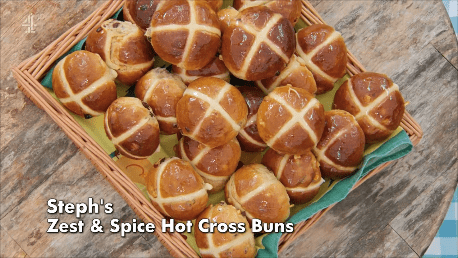 I wonder how the blueberry ones Alice made will stack up, they look great but they're bitter and imperfectly dissimilar. 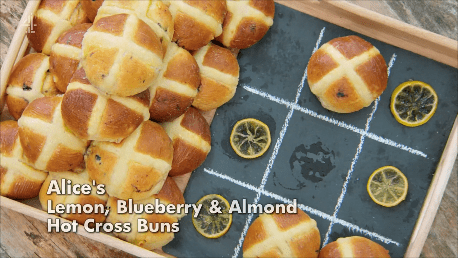 I mean: LOOK at these! They're adorable, Rosie! Paul doesn't like her crumb, her cutting while hot compressed it, but he likes them overall. 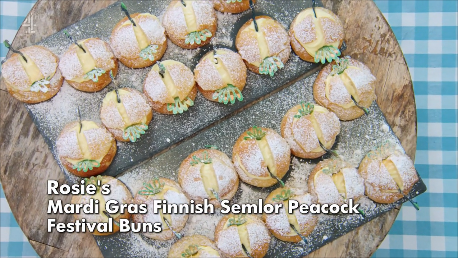 These don't look as pretty, Henry, but Paul likes the stable colour. They're delicious, the bake, technique and everything is great! 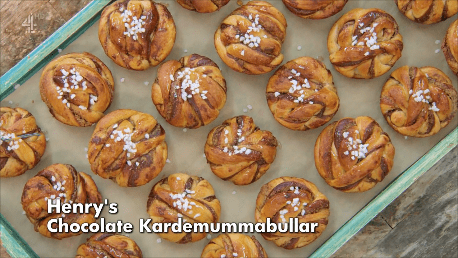 In fact, they're so good, he gets a Hollywood Handshake too! Henry and I are shocked.

Wooooo Henry! I don't think you're going to win, but I'm really glad you got that handshake!

We're on to the Technical Challenge, this time set by Paul, so we can expect no instructions, lots of steps and some frantic Googling by yours truly. Let's see what we've got in our mystery box today! The baketestants will be making 12 Sicilian cassatelle, which Paul told them should have a good texture inside and out.

They sort of look like wee pizza pockets, don't they?

Literally nobody knows what they are, but I'm confused that they were given a pasta machine, but the whatsits are pastry. Hm. 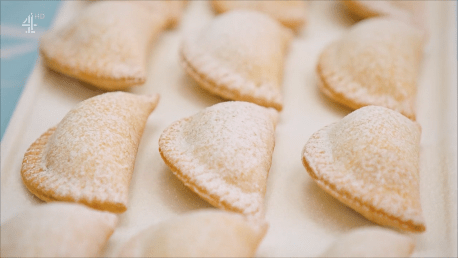 Now! Noel wants the deets from Steph about the handshake, was Paul's hand powerful yet sausage-y? Did the tent start spinning? Steph is trying to wrest plastic wrap from itself, she's got no TIME for this!

Wee Sandi is dragged into the cause to help Henry crank his pasta, he's a solid two feet taller than her. It's like if you pushed him down by the head and sprinkled on highlights...

All the bakers have finished rolling out their pastry dough with the pasta machine and are now filling their castelles with surprisingly variable goo. It should really all look the same, squeezed ricotta and chocolate and orange zest, but here we are.

We're on to frying and oh dear, I don't believe Michael's oil is hot enough. David and Rosie have made excellent looking whatsits but I'm afraid Alice's have all blown up. That looks like a pastry problem. 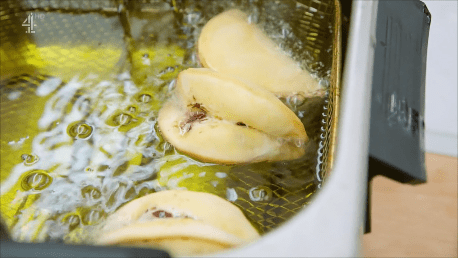 Oh and Michael's are even worse. Goodness. Everyone rushes and panics but Rosie and David are calm and moving in an organized fashion.

In order of worst to winner, we have:

Okay. I write these out before they judge them and I was REALLY hoping or David to actually win one of these bloody things, but he's second AGAIN! That's FIVE times he's been second in the Technical, that has to be a record!

David: Always A Bridesmaid. This time because of his fork definition, which makes me huff "fork definition? I have great FORK DEFINITION" and if you got that we should be friends forever and ever.

And Rosie won a challenge! Yay!

It's the next day and we're on to the Showstopper Challenge, bound to be super tricky on Festival Week (like, Festival Week, how does that make sense, exactly? Who goes to festivals for baking anything other than themselves?).

Risque banter between the judges and hosts, Alice and Michael are in trouble. I feel as though Alice will be alright, this is an unusual dip for her but Michael's been coasting near the floor for quite some time now.

On to the Showstopper! It's erm, a Malaysian cheerfully coloured grilled cake. I have no chance of understanding what Noel and Sandi called it, so I'm just going to wait for the captions on the drawings. 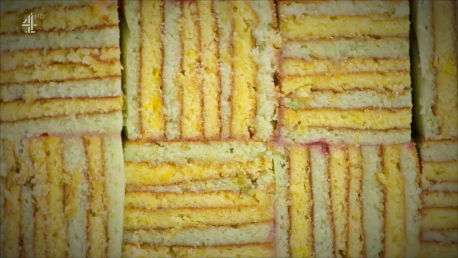 On to the pictures! I'm hoping one will have the correct spelling of the cake! 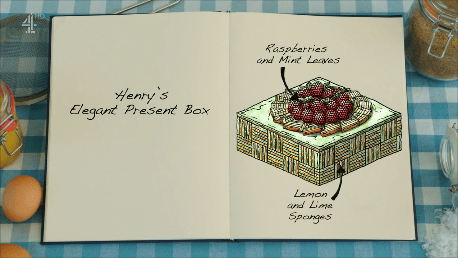 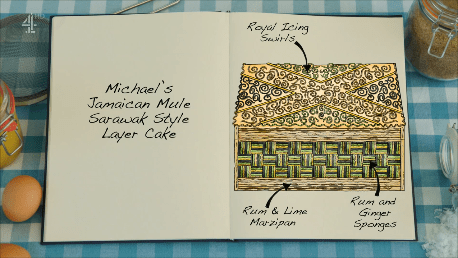 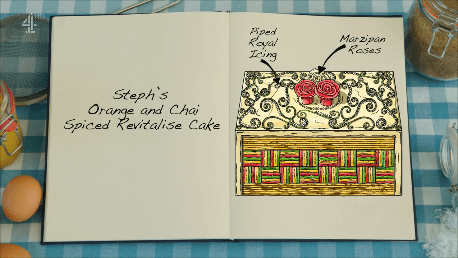 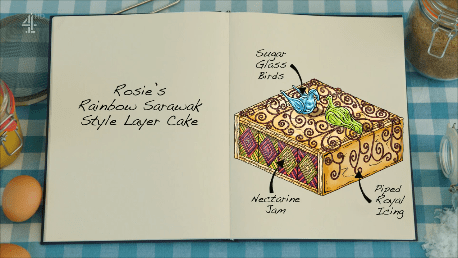 It's not just about 400 layers of grilled cake that they don't want to go EggyRubber, there's also the bright colouring to be accomplished. I'm interested in all the different ways they're achieving the garish displays, a nice gel colour can't be beat. I made so much teal icing that way, so much! 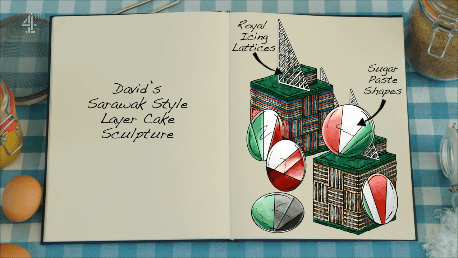 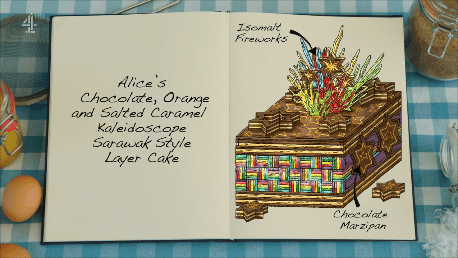 Many, many tiny thin layers head into the ovens for grilling, it's literally only going to be seconds between good and burnt or raw. David burns two pans worth, yikes.

Ermagahd, they have to keep grilling layers in.the.same.pan. HOW? I can't even imagine how impossible that would be. AND they're making fillings in between. Honestly.

Rosie burns a layer in less than 2 minutes, that's mental! I can't even believe anyone is getting cakes out of this, but they are!

If I see Steph stick her finger in her mouth one more time during baking...

And they're done, time is up! Our lovely young men comfort each other while I marvel at the fact that ANYONE actually managed to make one of these mental cakes and pretty ones at that!

I love how supportive they are of each other. Real men hug each other after a trying challenge!

Steph is up first for judging, there are lots of gaps in her cake but the sponges are delicious and so is the marzipan. 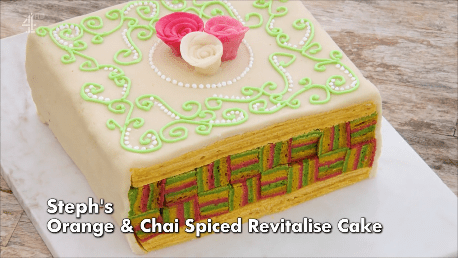 Now Rosie, they call her cake messy-looking but look how complicated her pattern is! It's not quite right. 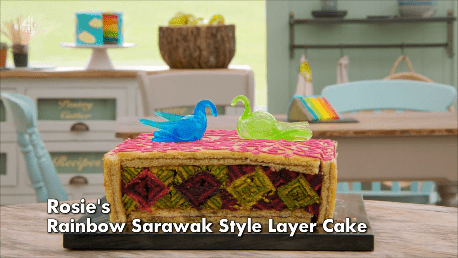 Michael gets read for not having enough colour in his whatsit, and for having claggy and stodgy layers. 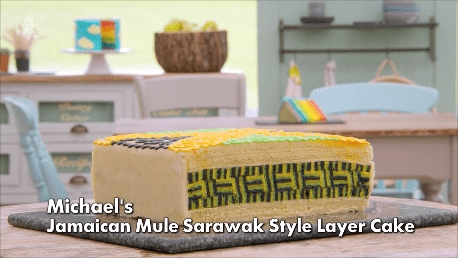 On to Henry and his elegant present box, yikes, talk about gaps! But the judges think the design is magic (Henry's joking even gets him a Sandi Toksvig Handshake!) but it tastes delicious and is well baked. 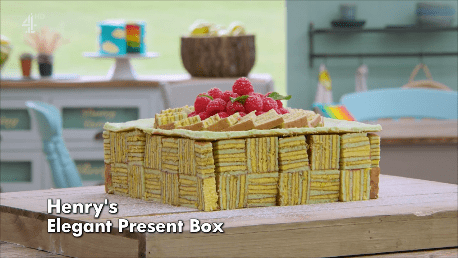 On to David's beautiful and gaudy cake whatsit. It's too small and rubbery but it's very tidy if not sweet enough for Prue. 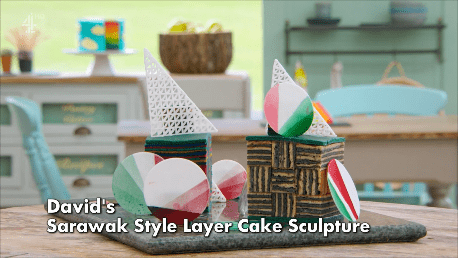 I love Alice's cake, look how fancy! It has the least gaps, yay! She has redeemed herself, good job! 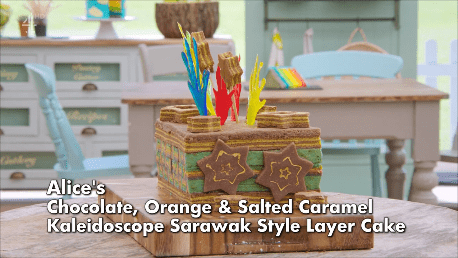 I shall let everyone yammer while I decide who I'm going to anoint this week.

I'm thinking Star Baker will finally go to David, as he's had a solid week. Leaving has to be Michael, it's time. You've got to the Top Six in Britain! I will give some room for Henry to make Star Baker, alright?

Hahaha I typed that out before they say so, I knew it wouldn't be David, as much as I wanted it to be

Thanks for reading along, cheers everyone!