Hi everyone, can you believe I left behind our beloved Great British Bake Off when I found those other lovely knock-offs? So silly. Back we go to season 8 of GBBO where we're closing in on our next great baker of 2017, this time for Week. Rolling into the Great British Bake Off S8:E07 Italian Week recap after the break!

It was a bit of a mixed bag last time for Pastry Week, young Liam Charles won Star Baker with his excellent bakes but we lost almost-as-young Julia Chernogorova to a series of unfortunate pastry efforts.

We're doing Italian Week for the first time, do you think they'll make those little cream puff mountains? Those are amazing and vaguely Italian. Trying to think of anything else that is specifically Italian AND baked, coming up blank...let's see what judges Paul Hollywood and Prue Leith or hosts Sandi Toksvig and Noel Fielding have to say about it!

First, we have to mention the heat. It's the hottest it's ever been in the Bake Off tent, at least they're not trying to assemble cakes with melty buttercream all over the place. Steven Carter-Bailey is ready to do whatever it takes.

Our signature challenge is the only other baked Italian dessert I could come up with: cannoli! 18 with three flavours of filling in two and half hours, pees! But. Isn't it just whipped cream filling? You can't improve on whipped cream all by itself, sillies.

Oh. It's a ricotta filling, so let me shut up entirely. Do you, bakers!

The cannoli tubes are deep fried, that's not going to be any fun on Naked Baking Day. The tubes are key, though, ricotta filling aside.

Liam is making his cannoli all about him, wooo. 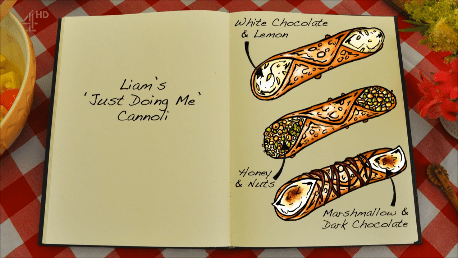 Lookit Steven's! I want them all in my face, right now. 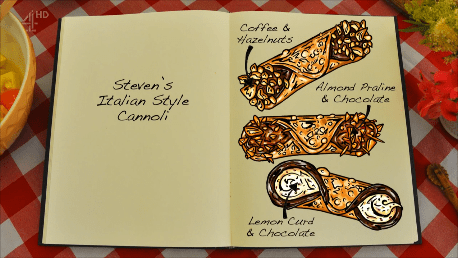 Stacey Hart is far too jaunty for a hot day in a tent full of deep fryers. Prue asks how she'll know when her cannoli tubes are fried properly if there's cocoa powder in the dough and Stacey essentially shrugs. Paul stares. 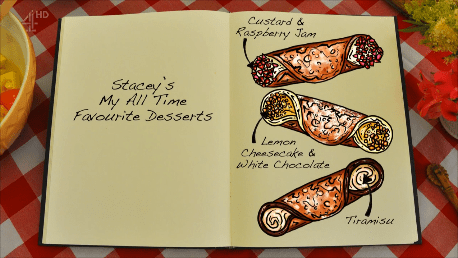 Kate Lyon is using Noel's favourite booze, it looks like he's swigging her limoncello. Paul warns of using too much alcohol, but I'm sure Noel will help with that. 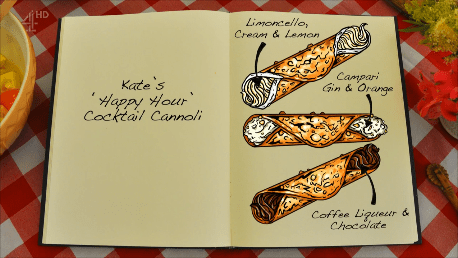 Yan Tsou is using cocoa powder like Stacey and booze like Kate, they're all melding into one baker! 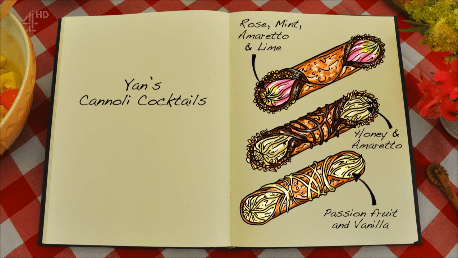 A metric tonne of Italian stereotypes fly through the air, I can't imagine what it's like to be defined in such a narrow way. I mean, people assume I burn easily (true) and have a terrible temper (WHO SAID THAT??) but they don't assume I'll murder a horse for not using ricotta in my cannoli as the Sicilians do.

Sophie Faldo don't curr, she's not using ricotta anyway, she's interpreting it her own way. I bet she doesn't even own a horse, so there. 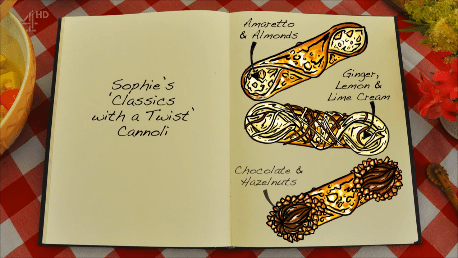 Paul is shocked and appalled when she reveals her plan to use marscapone cheese alone as the filling base, calm down, Blue Steel! I'd shove whipped cream in there, see if I wouldn't.

He gives up completely when he sees what else she has planned.

I think he cried a little there, inside.

It's extremely hot in the tent, sweaty bakers fan themselves while rolling out their dough with pasta machines. Everyone needs bubbles in their cannoli tubes, they've got to be thin, see.  They've added vinegar too and if there are no bubbles: you may as well go home and pet your horse.

So it's extremely hot in the tent already, but now it's going to get even more uncomfortable because everyone has to cover their arms for deep frying. I love Sophie's long glove-y thingie cover for her frying arm, it has to be cooler than the cardigan Stacey just dragged over her sweaty shoulders.

Steven's doing fantastic work, I really can't say how much I admire his clean, organized and consistent baking. Kate is having an off day, just one thing after another at her station.

Time for judging! In this heat! Stacey's up first, she put the raspberries on the wrong end or somefing, expect a comment. Paul moves them around. She gets great reviews for the filling but the pastry...is not good. 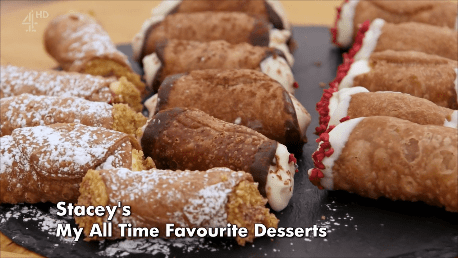 Liam did fabulous with his shells, bubbles galore. 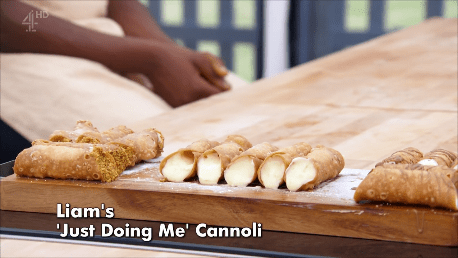 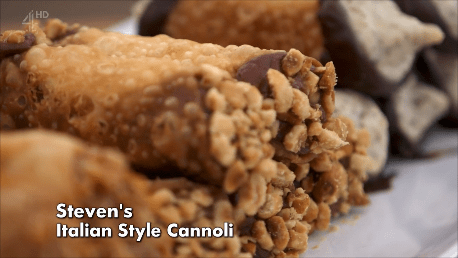 Yan did not achieve sufficient bubbling, Paul points out, and the cocoa masked the fact that they are underdone. 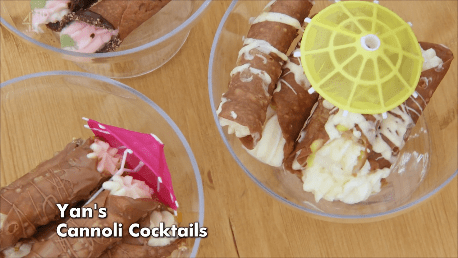 These look a bit of a mess, but Kate got tonnes of bubbles! 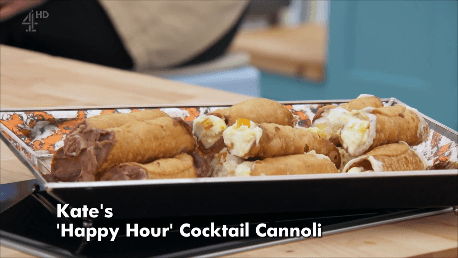 Paul is dying to try Sophie's marscapone abominations so he can drag her to filth, I hope they're amazing. They ARE! Woooooo. 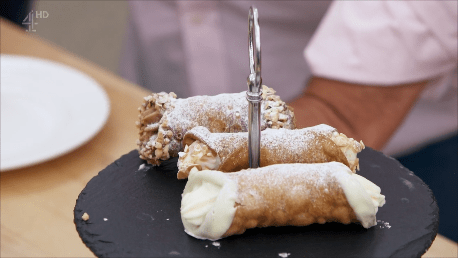 Okay, have some lunch, regroup and come back for a grueling Technical Challenge, alright?

The judges and hosts file into the tent wearing sunglasses, this time we'll be making Prue's recipe for...pizza! REALLY? I make pizza every week! I am very excited about this challenge, you know, someone once pinned my pizza recipe from my recipe blog. Once!

Ohmigooooood they want a Margarita pizza in this heat??? Do their ovens even go up hot enough? This is madness.

Prue explains that everyone thinks they know how to make this pizza. 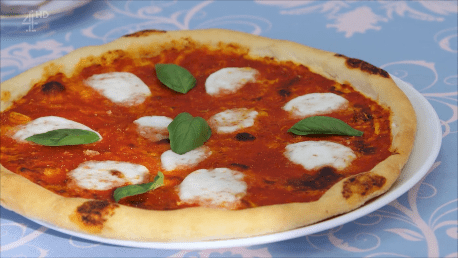 But they really don't. The tricky part is getting the crust thin enough. (Her crust is too thick, FYI)

She thinks she's being mean by taking away their rolling pins but who would ever roll a pizza crust with a pin? It's super stretchy, you couldn't even if you wanted to.

Everyone bangs out their dough easily enough and sets it aside to proof while they start on the tomato sauce, which means I have to watch bakers chop things with knives again. 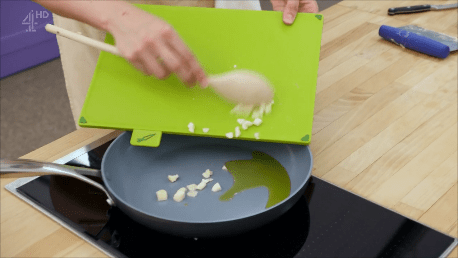 Is that you, Sophie?? Look. I love garlic, I use copious amounts in everything but if I got a chunk like that in my mouth, I'd probably hurl. Surely people understand about mincing garlic?

Kate cuts her finger, which is unfortunate as she faints at the sight of blood. The paramedics are on her right away and she's back to work. By that I mean she stands around and jokes with Noel and Sandi for awhile.

The bakers are somewhat flummoxed by their missing rolling pins, which makes me even more concerned. Has nobody made pizza before? You there, reading, if you've made homemade pizza, have you ever rolled it out with a pin? Madness.

Yan. Yan does flip hers in the air, but it's too thin and it folds over so she drops it on her station then.runs.her.fingers.through.her.sweaty.hair and touches her dough.

She throws her contaminated dough back in the proofer because bacteria likes warm and moist places.

30 minutes to go, bakers are assembling their pizza toppings but ah ha! Young Liam is the only one who decides to leave off his basil until after baking, it burns if you put it on first.

Ahhh Kate's looks like a dog's breakfast, I hope it bakes well. She's also left off the basil, whew, maybe that will help. Today has not been her day thus far. 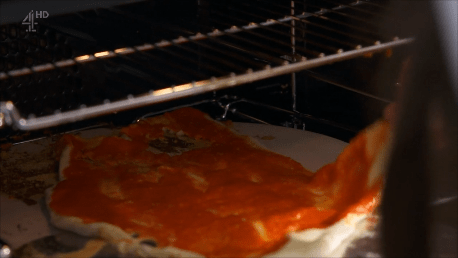 Ah it just gets worse. 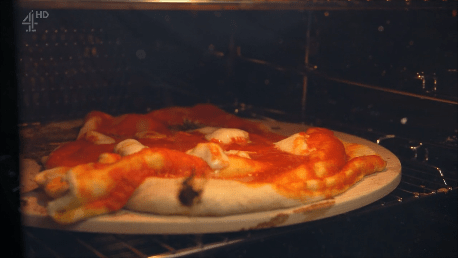 I mean, Yan's only now getting hers in the oven and she didn't flour her peel, so she's having the same problem as Kate. It's such a pressure cooker in there, pure chaos.

Okay, lots of bakers have sorted out that the basil goes on after, but Sophie's not one of them so she picks her burnt herbs off and throws on some fresh.

Liam has done a great job, I'd be surprised if he's not in the running for another Star Baker. All the pizzas, from least best to best are:

It's another day and it's time for the Show Stopper Challenge! I don't understand what it is, I'm sorry, we're going to have to wait until they show us something. Shell-shaped *Italian accented something* four and a half hours *look like leaves* *flaky pastry*? They should look like these? 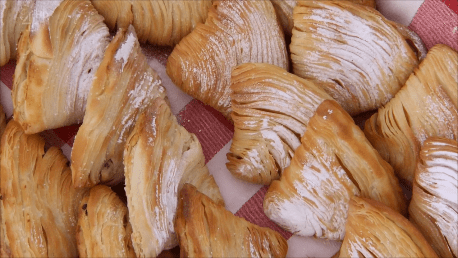 Prue has my attention!

Let's see what everyone is making: 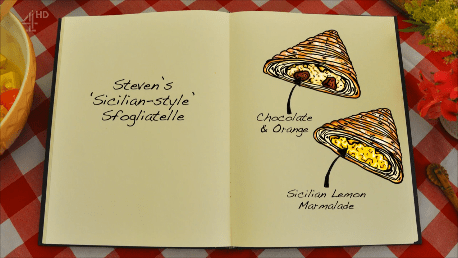 I perked right up when Yan said hers was based on a trip to Canada! Then I saw her ingredients were maple and bacon. Sigh. 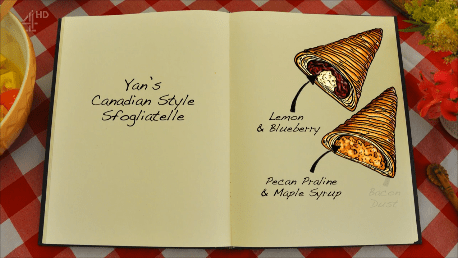 I'd like to think I wouldn't make a tea and crumpets flavoured whatsit if I was baking English-style, but let's not kid ourselves. 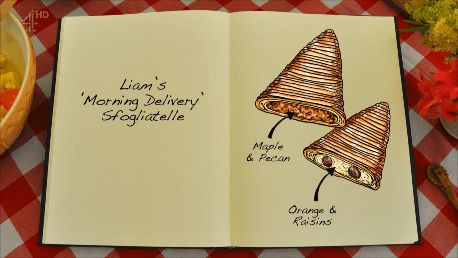 You need 14 metres of pastry to make these. 14! The pasta machines are cranking like crazy, I really need to get mine out and make some pasta, hmmm.

Kate's quite good at trying unusual flavour combinations and today is no exception. 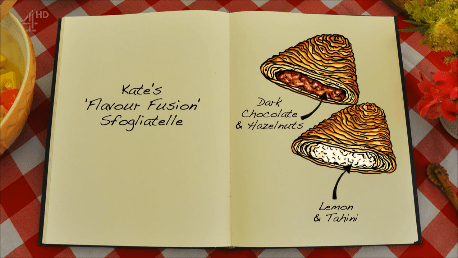 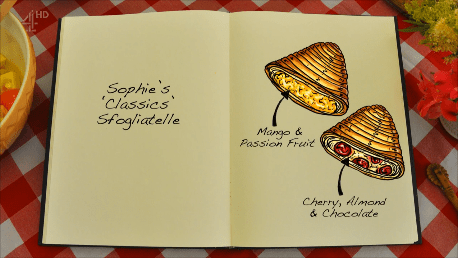 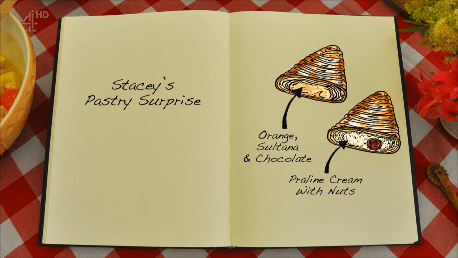 That's what I was thinking of! Profiteroles! You make them with choux pastry and pile them on top of each other, someone should do that!

It's 40 degrees in the tent. 40. I burst into flame ten degrees before that and they're BAKING. Jeebus wept. Dough is tearing everywhere, people are starting over and there is only one hour left.

Ah poor Kate, her weekend has not improved. Her dough has not achieved lamination and neither has Yan's. These two will be fighting it out in the bottom for sure. Stacey's also riding the struggle bus.

Paul watches as Liam messes one up, of course it's when one's a mess, right?

Liam, Sophie and Steven all have great looking *Italian sounding something* going into the oven.

Everyone, literally everyone in the tent, watches Stacey attempt to inject her *Italian sounding somethings* with pastry cream but she's so wrapped up she doesn't even notice. Yan's whispering under her breath "come on" and that's why I love this show.

Oh no, there's only a minute left and Yan's are still in the oven, she pours them out from a baking tray just as Noel calls it.

Time for judging! Liam is first with his clever display but. Do they look like lobster tails? 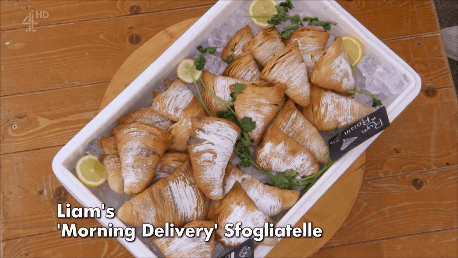 Steven did a great job in looks, how's the taste? Excellent! 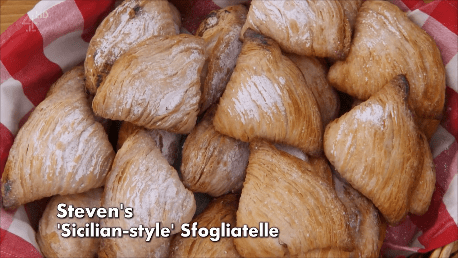 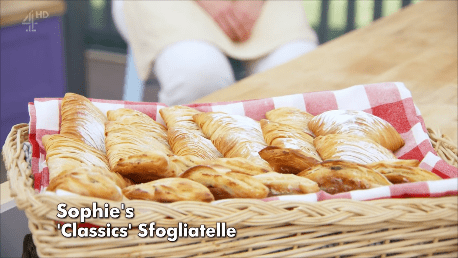 Those were our top three, now we have the others, starting with Kate's wee whatsits. I'm proud of her for not crying, she's had a rough couple of days. 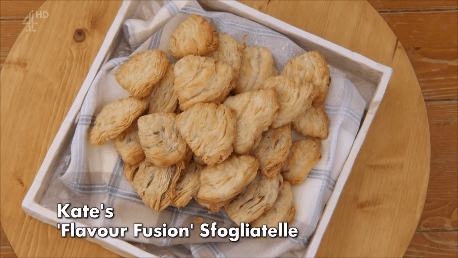 If Prue calls maple/bacon extremely Canadian one more time, I shall scream. Yan's also had a challenging weekend. 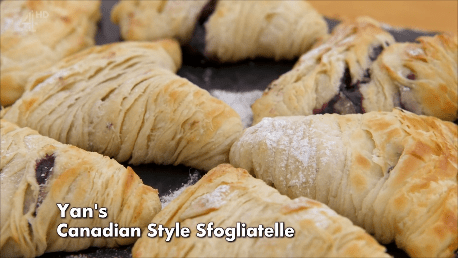 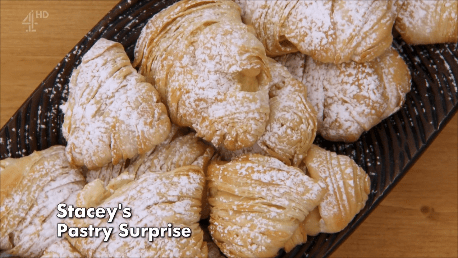 Let's just get this over with, shall we?

This week we have Star Baker: Steven Carter-Bailey

It's always harder as we go on, isn't it? We get attached and I'm sorry to see anyone go, let alone Yan, whom I adored. She was always funny, always trying and she understood the importance of phallic cakes. I shall miss her.

The only thing is that Stacey was pretty sure it was going to be her.

You get another week, Stacey! Make it count! Until next time, everyone, cheers.