Hi guys! Welcome back to Invite Only Cabo for the season finale, which looked HARSH in the promos, you know what I mean? Harshhhhh. Let's see how it shakes out for our vacationers and if we get my favourite ending: the Captions of Truth. Rolling S1:E8 after the break.

We wake up the morning after Corey's birthday, Emily Moses snoring like a bull and Agu Ukaogo rattling furniture trying to get her to shut it. In the kitchen, Malaku Quisada thinks he's still drunk but I KNOW Corey still is. That man imbibed half of Cabo San Lucas last night, AND told his boyfriend Larry Sims that he loved him. I sense a not awesome morning for that young man OR host Larry.

Emily's had another blackout; allow me to say this from a place of love, gurl. You need to think about your life choices right now. Blackouts are scary af and two so close together?

At least Emily's forgotten the part when Agu was a raging fcking ahole to her in the car; I get that he was mad but I lost every bit of respect for him during that screamfest. Nobody should treat someone like that, especially not someone whose privates you've sung the national anthem into.

It's today that is Corey's birthday, my bad, and since he and Larry like the finer things in life (LIKE EVERYONE), Larry's rented a yacht. Larry's OLDEST FRIEND Jermane Britton couldn't even sleep last night, he was so worried about it. He thinks black people don't belong on boats? 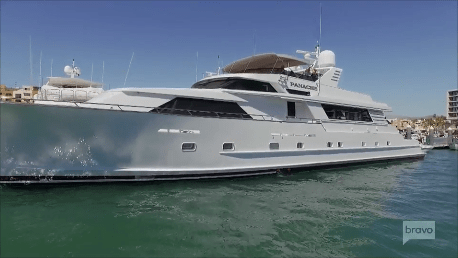 But the crew doesn't. I'm still going to picture this episode from the perspective of the crew, bitching in the back about Emily showing her moneymaker and spilling tequila on the rug.

Bianca Banks is doing the math and coming up short between what Larry did for her birthday vs what ManBun is getting on his...yeah. Number Two means you try harder, Bianca!

Jermane spots something on the water, omigaw what is that? Humans. Humans swimming, Jermane, hahahaha. Group selfie! 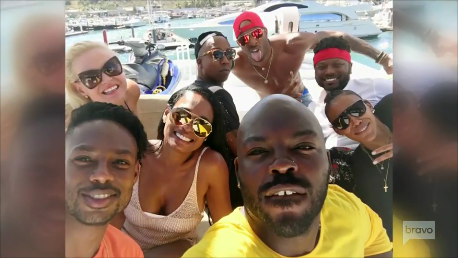 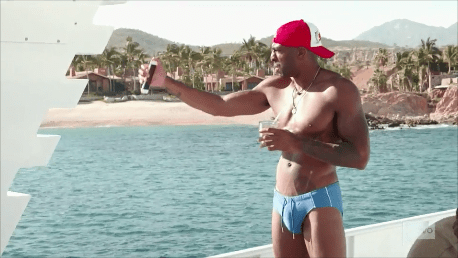 Kamani Alana walks in just as everyone is rehashing the kerfuffle in the car the night before; I can't believe Kamani thinks it's good he told Emily off in such a crude and aggressive manner. You won't let anyone even raise their voice around you but you think it's good that he shouted AT A WOMAN that she needed to shut the f*ck up? Gurl.

Kamani is so glad that he verbally abused her rival that she poses for a selfie video with him. Come thru indeed.

Guess who else doesn't remember the night before! NO, GUESS??!!

Larry is super embarrassed that Corey isn't immediately professing love back in front of all of his friends. Jermane is suspicious and nobody knows where to look.

12 year old Corey thinks that not expressing your feelings is just something to be treated with alcohol.

I keep forgetting what show I'm on and expecting to see Kate Chastain instead of a chubby sunburned guy as the Chief Stew!

So. Jermane is terrified and CAN'T SWIM but is going on a jetski in the middle of the ocean. He loves it, he feels like the black James Bond back there!

Larry and Corey head out to supper while the rest of the gang orders Chinese food and strategizes about a plan for their last evening tomorrow. How about a catered dinner for Larry?

Larry and Corey are sharing food off each other's plates; hoo. I don't like to think of Larry like this but he seems like he's chasing adorable young ManBun, who is keeping his options open. Larry brings up the I Love You again; is Corey in love with him? Corey equivocates and it almost hurts to see Larry so vulnerable right now, because I'd put money on this: Corey is not in the same place.

Corey hems and haws, yes he meant it! Larry just needed to ask the right amount of times (three) and look like he was about to start crying. Corey just doesn't do the vulnerable thing, see.

But Larry's happy! He's ecstatic that his fella loves him back, while under the influence of a fifth of vodka. Birthday present time! Larry got Corey a gold chain and a gold Bvlgari ring to wear around his neck because they are now committed to each other. "Love you." *pause* "Love you too."

Agu and Kamani chill in the hot tub and talk shit about Emily and you know what, Kamani? I wash my hands of it. If you want disguy back, knowing how disrespectful he is to women, KNOWING he would bang Emily in a heartbeat if he doesn't get what he wants from you: then go. Go with God because you're gonna need it.

Ah Larry. This man is in LOVE

Don't you break his heart, Corey! Don't you do it!

The gang tells Larry to be ready for a nice dinner, dress up in your finest!

But guess who didn't remember anyway and can't defend her own drunken arse? She hasn't got any friends there, not really. She's starting to realise she's got a problem; she's self-medicating and it's not a good thing. She calls her drunken alter-ego Enemy and that's about right.

Everyone but Larry head to town to do some shopping; Agu is looking for something special for Kamani. He settles on an aquamarine necklace.

Everyone is all fancy for their last night out, Jermane even has on his special Adidas onesie. 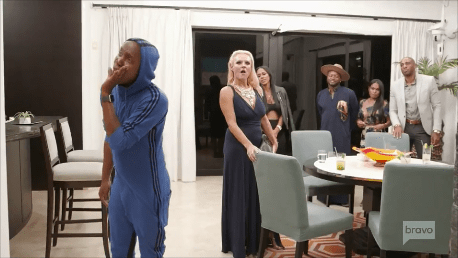 Time for dinner! Walking down the stairs we get Bianca's pixelated nipple and Emily's whole vagina, come ON!!

Malaku pops the question of the night as they sit down and eat; would Larry do this again? He would! (He's fibbing, being nice or just drunk, I don't know him well enough to tell) They got him a present to say thank you, it's a vacation from his vacation! A spa trip for one to Palm Springs, hahahaha.

Emily didn't drink during dinner, but she's ready to party!! Let's go out! Everybody has a blast, dancing and carrying on and then it's time to go.

Agu and Kamani kick Bianca out of their car so he can give her the necklace and get his kisses, he's never waited this long for smooching in his life! 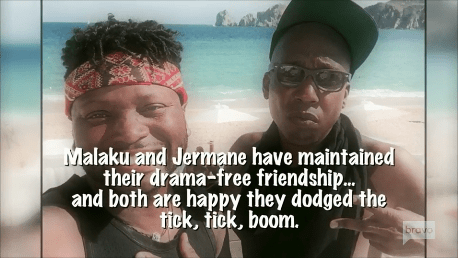 Bianca is not helping Larry pack his 400 hats 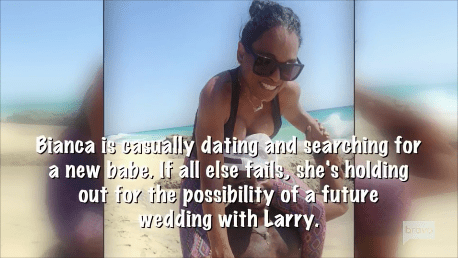 Agu and Kamani have a lovely conversation about the future, she's looking forward to seriously dating him!

Larry muses about if these walls could talk...nobody will ever know what happened on this vacation! What happens in Cabo...stays in Cabo! IF ONLY yells Emily 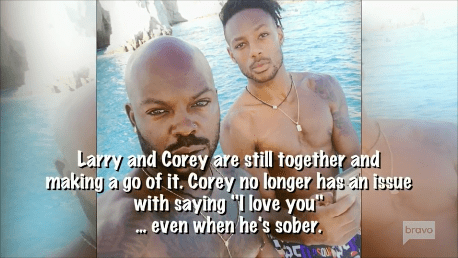 and wow, that surprised me. I hope it works out for Larry and ManBun. We're out!

Lessee, I liked Malaku, but how could you not? He was hilarious AND adorable. Jermane wasn't quite as shadddddy as he thought he was but after all: he is LARRY'S OLDEST FRIEND. Bianca and Kamani I've talked about quite a bit, as well as Emily, I have a soft spot for our Emily. I maybe used to party too hard too and made a lot of bad decisions. Now I have kids and I'm old and boring and don't drink at all, but I can still see the ghost of decisions past in Emily and I hope she is able to pull it together. Of course Larry is awesome, I hope Corey isn't as flighty as he appears.

I picked this show for two reasons: one I like Sally Ann Salsano's shows typically and two: it got rave reviews on Twitter, so here we are.

Thanks for reading along this season, check out some of the other Bravo shows I recap, like Below Deck or Top Chef, or can I interest you in a British drama or four hundred? They're my FAVOURITE! Cheers!