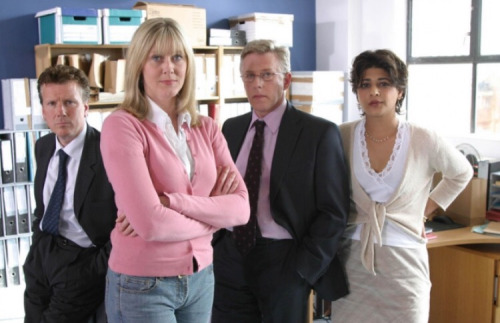 Welcome back to Rose and Maloney; did everyone see that Sarah Lancashire won Best Actress at the TV Choice Awards for Happy Valley Series 2??? What a night, the Twitterverse 'SPLODED and excitement and nude pic requests were in the air. There is an amazing SLancs fan base on Twitter, if you don't know of it, check it out: so!many!awesome! Fancashires! It's a nice accompaniment to the Sarah Lancashire Fans Facebook page.

ANYWAY, Let's see what the last third of the second series of Rose and Maloney has for us, shall we?

We open with Rose injecting insulin in the back of a taxi while smoking; that's the first reference we've had to her diabetes in ages! I don't know why I was worried about the smoking, insulin isn't flammable, izzit?

Wendy's giving Maloney another case; just a formality. Since the history of time has Rose Linden EVER treated one single case as a formality? One? The entire CJRA is being scooted outdoors while the office is checked for bugs, guess who gets to clear Rose's desk of rotting food? GUESS! Rose arrives just then and is frantically trying to get properly attired out back when everyone strolls up

They start to review the low-priority case for formality's sake; looks like Joyce and Maloney are getting along just swell! Rose asks after the case of George Parris killing a prisoner called Turner while Joyce and Maloney cuddle, I PARTICULARLY like how Rose sweetened her tone, as though speaking to children.

We get a flashback of the incident; George Parris was a loner who avoided white prisoners, including gregarious Scot Alan Turner (Paul Ireland) who eventually copped a toothbrush in the neck.

There's a (possibly coerced) confession and very little to go on, Rose doesn't even know why they're looking at it! It seems Vincent Parris, the inmate's son, made the request and since he's 19 and his dad went in 16 years ago... George Parris (Eammon Walker) sounds like a bit of a loose cannon; 16 years for firearms offenses sounds INSANE, but a hunger strike and hostage-taking after means he will be in for a very long time.

Maloney sends Rose out to the car for a cig while he calls round about George Parris; but after she leaves, slowly, suspicious at his largess, he calls about booking travel. Are he and Joyce going away? There appears to be a bug in his phone though! The worst recording device ever and now he's wondering what's going on.

Maloney stands outside his car, watching Rose rub her lower belly (not a wank, Maloney, come on!), he gets in to grouse about the phone system, which all leads hilariously to him having to tell Rose he was looking to book travel. Oh and George Parris is missing. Not Escaped, but Bureaucratically Missing: completely different. Maloney is stuck as to how to start, but luckily the gods have gifted him with someone clever to work with, and she knows exactly how to proceed. Find out about the victim, she'll talk to Vincent Parris, right, off you go.

Maloney's run into a brick wall ALREADY; his address for the Turners doesn't exist. Rose doesn't do much better, Vincent isn't at home, but his grandmother Gina (Yvonne Brewster) is so she gets a little more background and a cuppa. Vincent (Emmanuel Idowu) makes it in with his girlfriend Scarlett (Tiana Benjamin) but talk about a brick wall: he doesn't want anything to do with the review of his "choir boy" father, just wants it based on the facts. He didn't even know his dad. It turns out he means choir boy literally, as he heads off to singing practice himself and Rose is left to extract as much as she can from Gina. It's not much, she hasn't been to see George in three years.

George is a very angry, very large black man with a strong accent who has been found and will be interviewed just shortly by our dynamic duo. Seriously, he's massive, I thought he might have had a slight build like his son, but he's all football player with a Jamaican accent.

George does not want this review, but he does want one of Rose's cigarettes. He stares at it and almost smiles she she talks about his son, but safety is primarily his concern. He shouts out that he DIDN'T ASK FOR THIS REVIEW! Everyone should know that!! at the guard and then is forcibly restrained when he raises his voice again.

If there was anyone other than Rose Linden on the case, it would have been dropped resoundingly by this point with a meaty thud.

The guard (Tim Faraday) has kept Rose's confidential case files for 37 minutes, has anyone read them? They have a showdown and I LOVE how she's the tough and Maloney is the one hanging in the back staring at the floor. How often do women get stuck in THAT role? I'd much rather be bumping up against louts personally!

Rose and Maloney have shouting match outside, she wants to investigate George's original offense and he does not. It ends in the best way possible when he asks if she wants to go for a drink

Maloney's gone for that drink anyway, at a gay bar while a man with a file joins his table. Maloney explains that he's not a "regular" but I'm guessing this man isn't either. He warns Maloney; Alan Turner didn't exist and anyone Maloney talks to about the case will blow smoke up his arse. What? How can Alan Turner have not existed?

Maloney goes rushing outside after the man, ignoring the file that's been left on the table until he returns. His paranoia, borne of phone recording device, must be off the CHARTS.

Just a quick note: there is no way Maloney didn't know what sort of pub he was in, there is a giant picture of two men about to kiss on the only access door. Is it wrong that I'm hoping Maloney is gay at this point? Gay seems to mean so much less in entertainment in the UK these days; I'm thinking of the show Cuffs, where sexual orientation was introduced and dismissed within the same sentence, for straight and gay alike. Although, there is Last Tango in Halifax, where the death of the main (she was MY Main character) lesbian character's wife generated a metric tonne of shite. There was a recent interview by that show's creator and writer Sally Wainwright wherein she said that she regretted killing that person off, partly because it incensed such an overwhelming fury from the lesbian fan base, but also because she wondered if it might have been a "lazy choice". I've talked about this a bunch on Last Tango in Halifax recaps, but I will just say that the death of Kate made zero sense to me. Not from a "kill your gays" trope standpoint, but just from the view that killing one half a long-suffering couple who were FINALLY together ONE DAY after their wedding seemed...slightly random and unnecessarily cruel. Sorry, sorry, back to the topic at hand, just somewhat relevant given the Slancs factor.

In the mysterious, left-behind envelope is an obituary for an Alan McCaffrey, whose picture matches that of Alan Turner's mugshot from prison. Alan Turner must have been undercover.

Maloney's tracked down Alan Turner-McCaffrey's wife Jean (Therese Bradley), who's been expecting him and has the most musical Scottish accent. Ah!! And that's it, Alan WAS a police office undercover, she knew that at least, so whomever was being investigated was who killed him. Case solved: lock up that tall angry guard who got into it with Rose.

Gina's taken Rose and Vincent to the scene of George's original crime, the bank he supposedly robbed with his friend Benjamin. So much was going on that day; there were police everywhere and they seized on the two black males that walked by; why them? Was the bank already robbed? The police chased the two men, firing on an unarmed George (all he had was a dry cleaning ticket, he got scared and ran) then planting a gun on him.

It's a measure of our times that Rose is shocked that the police brazenly fired on an unarmed black man in front of women and children.

Wendy hasn't come up with anything on the two main police involved in the original offense, Inspector Bennett (James Pearse) and Sergeant John Chatham (Steve Nicolson) or Alan McCaffrey's role as an undercover police detective. Wendy yells at them as per usual as a goodbye.

Maloney and Rose discuss their new information; Rose thinks the reason George isn't talking is based on what happened the day he went to prison initially for using a fake gun in a bank robbery. He pled guilty to that as well, but WHY? She smokes and thinks and smokes and thinks but fastidious Maloney is distracted

Vincent and Gina have come to see George at his request, George really is handsome, isn't he? It's very painful for George, it's a reminder of everything he doesn't have and why he has to keep the line. There's about 60 seconds of a lovely visit while they discuss music and then Angry George is back; if Vincent thinks he's gonna get easy money for overturning this conviction...go home! And don't come back

So much anger and loss in this case

Rose and Maloney are meeting with Alison Francis (Helen Schlesinger), who was George Parris's lawyer for the firearms offense. Maloney wants to know about the current murder but Rose is looking for more information about the alleged bank robbing. Allison wasn't the real barrister, she had to step in last minute when the other was double booked. She didn't even have time to read all the evidence, but whereas the previous lawyer wanted to have George on the stand, she advised him to take a deal and plead guilty. The chances were good he'd go home that day. We know how that worked out for George, he got six years initially.

Vincent's called; he wants to see them. Maloney apologizes along the way, she's right about this case being hinky. Someone's following them as they walk along.

There are things missing from Gina's apartment, Vincent's been off on a heroin binge after the brutal visit with his father. He walks in to yell at them to stop the case, no more looking into it for him and just as Maloney's arguing that it doesn't work that way, several masked men burst in and force them all to their knees.