Hello! Welcome to my first recap of the new Sarah Lancashire series The Accident. Those that have been on the site before know I am a huge fan of Mme. Lancashire and have recapped everything I could get my hands on, new readers could absolutely check those out if they were so inclined! I haven't heard much about this series, other than that reviews are mixed but generally positive, but I would watch it anyway, right? Right. Rolling into S1:E01 of The Accident right after the break!

First off, we have to acknowledge that the series was written by Jack Thorne of one million things but most relevant to us: of Kiri, also starring Sarah Lancashire. That was a difficult series, but a very interesting one. Let's see what he's brought us this time!

We open with gloomy credits, seriously, is there anything sadder than balloons without happy children attached?

Then we segue to Polly Bevan (Sarah Lancashire) highlighting the hair of Angela Griffiths (Joanna Scanlan from Requiem! That series had another favourite actor, Brendan Coyle) while gossiping then inexplicably letting her leave with a head full of foils.

Polly heads upstairs to find her 15-year-old daughter Leona (Jade Croot) naked and entertaining a naked male friend (we saw bare bum and everything!), it can't be the first time as Polly is quite calm while directing the unknown man to jump out the window. "It's only two stories. I'd be happy to push you" whilst her daughter dresses under blankets.

A much more idyllic wakeup for Debbie Kethin (Genevieve Barr) and her partner, who's under an unnamed stress that is somewhat relieved by Debbie taking off her negligee and climbing on top of him.

Iwan Bevan (Mark Louis Jones) is a bit of a joker, innhe?

He's doing a funrun and wants to make sure he doesn't look like an "appendage", does he? Leona gives him the gears, she leaves and he avows that "today should be fun" so we know it won't be, at all.

Debbie's partner (sorry, no name yet!) gets to work at a construction site still looking worried and calling someone named Colin.

Leona's making her own call. She did NOT lie about her age.

In the background is in the funrun beginning, Polly lining up with everyone while Leona heads over to eat some edibles with a friend.

Iwan Bevan must be a big wheel in the town of Glyngolau, he gives a speech before the beginning of the run next to a picture of the construction project we saw earlier. 'The Light' looks like a large apartment complex with businesses below, very different from everything else we've seen in this town so far. He loves their town! He was born here, lived here his whole life and now they're taking the town back to where it should be!

This project is supposed to bring 1000 new jobs to the region, but right now it's attracting the attention of a bunch of wayward teenagers looking for a fun place to get high(er). Leona climbs the gate, six or seven others follow.

The funrun starts as the teenagers explore the site in slowmo, hiding from Debbie's partner who doesn't want any fecking excuses about delayed deliveries, right?

The teenagers gain entrance to another part of the site and start spray painting everything; we learn that Leona's best friend is Mia Griffiths (Emily May), most likely the daughter of Angela of the highlights above.

Some of the people are actually running in the funrun, others like Polly are walking and Angela is even smoking. Leona and Mia separate from their group to draw alone.

A large explosion stops both groups in their tracks, fire blows out one of the windows on the construction site.

The whole town heads to the site, to be held back by the frustrated police. Polly calls and calls Leona, who's been badly hurt in the explosion. Debbie has to be carried away from the site, screaming for her partner Alan (Kai Owen! Thank you for the name!) as the townspeople watch.

Mia is also badly hurt and instability is affecting rescue operations. More police show up to help, but they don't even know yet how many people are trapped below. Mia sort of answers her phone and everyone's worst nightmares are confirmed.

In the big city, Harriet Paulsen (Sidse Babett Knudsen) has been informed of the gas explosion and is on her way to the site; she's brought up short when told there were kids inside. Nobody's supposed to be on the construction site.

It looks as though Leona might be alright, but there's a boy next to her that very much is not. The Technical Rescue team finds them just as Harriet pulls up in time for the whole project to implode in a flash of dust and fury.

**I literally sat there with my mouth open in the same way. Everyone was trapped inside, the teens and rescuers while everyone watched.

Wait. Some of the rescue team is alive?? We see movement inside, how is that even possible? Is Alan okay? We just met all these people!

Polly spies Harriet at the back of the crowd and attacks while cameras around them roll: what is she going to do about this?

That in and of itself is a strange accusation.

Screams draw Polly back to the gate, people are being brought out, some in body bags, which causes her to shriek.

We move to Polly and Angela waiting at the hospital, each family is called away separately. Debbie can't get any information about Alan, nobody's heard anything. Finally, Polly is approached by a doctor (Phaldut Sharma) while she waits alone, she can't find Iwan.

But it's good news; Leona has serious injuries but she's alive and they expect her to live. Whewwww. This is partially because a man named Martin Harris (Shaun Parkes) had already gotten to her when the roof fell in, and she was closer to the exit. Martin is still alive as well, but we don't know if any of the other kids made it our yet.

ERM. What. I guess everyone grieves differently?

Oh and Alan is maybe alive too, although Debbie cries over him so I can't be sure. Polly heads straight to find Martin who saved Leona, he says he was walking past. That's...hinky. You can't just walk by a locked up construction site.

They have a lovely banter, considering. She leaves her card and directs the nurse (Camilla Beeput) to "look after this one."

This is weird, Leona's dad Iwan, the big banana, wasn't at the hospital or answering calls from his wife but instead is at home watching Polly hurl invective at the head of the development company on the news. Why is he staring so intently at Harriet?

The police sit with Polly. Detective Anne Hendricks (Kimberley Nixon) is just trying to get a sense of what happened. See, the project was Leona's dad's primary focus, it's not too hard to figure out why she'd mess with it. He was even managing the accounting of the site. The police are wondering if Leona blew up the place on purpose.

Harriet checks in with her aide Tim (Nabhaan Rizwan); I can't guess what his role is exactly but since she's asking him for advice, I'm confused. He's very young and she is the head of the company. And then he says he loves her and everything shifts into focus. She does not say it back and instead ignores it and asks to be transferred to the others.

Polly arrives home to find Iwan mute and staring at a model of The Light project. He explains away his absence at the hospital as not being sure his daughter would have wanted him there then natters on about the funrun fundraiser. Polly and I are confused, but not THAT confused that I wouldn't want a cuppa, Polly.

Why is Iwan so smiley and weird? Polly is apoplectic, Leona was only there because it was her dad's project and now he won't come to the hospital to see her?

Iwan stops smiling and starts beating Polly with his awful meaty hands. They both cry and she comforts HIM. Jaysus. People who don't understand domestic violence won't understand that, but you don't always know you're being abused. Your partner is just going through a rough time, they don't mean it and you're the only one who understands. Who can help them.

Angela tells Debbie that the whole town is heading to the site, Alan tried to save Mia's life. Polly waits alone at the hospital covered in bruises from her husband, watching Harriet talk on the news. Dr. Whittaker brings glad tidings; although there is possibly paralysis, Leona has opened her eyes. Polly excuses herself to cover up her bruises before seeing her daughter, Dr. Whittaker notes the unusual choice and brutal marks.

Harriet arrives at the hospital then, offering anything she can. There's something odd with Harriet and Iwan though.

The whole town marches to the construction site as Polly is brought to see Leona, and Debbie comes to see Alan.

Look at the juxtaposition of Polly's bruises and Leona's injuries. 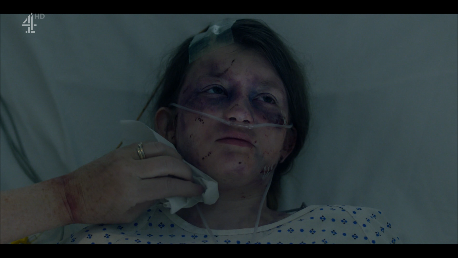 Debbie knocks and is allowed in by Polly, she helps Leona communicate as she cannot yet speak. Leona wants to know about the others; it's not good news. She's the only kid who made it out.

The vigil full of mourners at the gate is full of tears and anger, but Iwan waits at home alone with his model. Harriet pulls up and drives away as he watches and we're out. Hmm.

So. This is drawing obvious comparisons to the Grenfell fire, which is under review right now. We've got quite a lot of other themes here to dig into; domestic violence, underage sex, industry vs. life, small towns and the petty delinquency they can incubate, just.so.many. Watching all the emotions play across the sublime Sarah Lancashire's face is the best part of all, although it's been wrenching. I'm interested to see where things take us on The Accident, until next time!