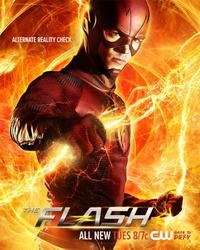 We're down to the last three episodes of The Flash for Season 2, and the Zoom storyline is still dragging along. Time to wrap it up, kids!

Time to see where the heck Barry has gone, and if Harry's mad experiment worked and he has his speed back! Otherwise next season will be called The Barry, I guess.

In the aftermath of the explosion, Harry tries to hail Jesse and Wally to make sure they are okay. When they don't get a reply they run out of the chamber, and find them collapsed in the hallway. Wally wakes and is okay, but Jesse's heart has stopped. Harry gets it going again, but she doesn't wake up. She's in a coma just like Barry was.

Cisco Vibes on Barry's suit and sees him across a vortex. He's okay, but not at all where he should be.

Barry wakes and he's in his childhood home, lying on his bed. He goes downstairs and all looks normal, until he comes across crime scene tape and Joe in his police uniform. Barry asks him what's going on, and Joe tells him it's all good but he's not Joe. He's the speed force, showing up in human form. Joe explains that speed force has been there since the beginning of time, and is the source of Barry's speed. Barry compares it to talking to gravity or light, and Joe agrees. Barry is in the speed force, and it wants him to regain his powers, but he'll have to do it of his own accord. Beginning by chasing that shadow racing around the neighbourhood. Run, Barry run!

In the real world, Cisco tells Harry about his vision and Harry realises he's in the speed force. Henry demands that Harry fix it, and Joe takes him aside. He convinces Henry to look after Jesse, being a doctor and all. He agrees and asks Cisco if the other Wells kept notes about the treatment they gave Barry when he was in his coma. Cisco tells him they keep those records in the morgue, and Henry tells them to go and get them.

Iris and Cisco head down, it's dark and creepy. They're looking around, when suddenly a zombie looking dude bursts out of the cooler. It's Girder, a meta-human who turns himself into metal, a meta that they killed previously. Girder has been brought back to life in the explosion, and he's now a Frankenmeta. He crashes his way out of STAR labs and heads for the city.

Girder makes his way to the Big Belly Burger, and Mr Jason Mewes exits, extolling the virtues of Star City Big Belly over Central City's. His date admires his Hummer, just as Girder smashes the shite out of it.

Harry has worked out a way of channeling Cisco's powers, so he should be visible to Barry in the speed force vortex. Making Cisco the beacon to guide Barry home. Cisco Vibes, and makes contact with Barry who is still talking with Iris.

Barry is begging her to let him go back, and Iris tells him he is free to go back whenever he wants. But if he goes now it will be without his powers. Cisco calls for Barry to take his hand, and Barry makes his choice. The shadow flits past, and Barry gives chase. Cisco is drained, and devastated that he couldn't keep a lock on Barry.

Iris and Joe work out that Girder is after Iris again, just like in the past. Girder is following the exact same path as last time, and they predict that he is headed to Joe and Iris's place. Iris decides to use herself as bait and lure him back to STAR labs.

Barry is still running, and this time he comes across Papa Henry. Barry asks if all the lives he has saved haven''t been enough, what more does he have to give them. Henry tells him of course all that matters, and he's the only thing left standing between everyone and unspeakable evil. He's standing at a grave site, and it's Barry's mother's. He's never visited his mother's grave, he's never been ready.

At Joe's, he tries to test Wally, to see if he's developed any meta-humanish skills. Wally seems unchanged, and doesn't react when Joe deliberately drops his mug. No super fast reflexes, yet. They hear Girder make his way up the street, and Joe sends Wally upstairs. Iris heads out into the street and whistles to get his attention. He starts toward her, and Iris starts her own run to STAR Labs.

Barry is still heartbroken over his mother's death, he's still not past it. Henry tells him that he has to accept it to move forward, to make peace with the decision he made to let her die. Barry tells him he will never accept that, but Henry tells him his mother would not want him to die for her. And every life he has saved since then also has that value. He tells Henry he doesn't have time for this, he has to get home, and runs off again.

Iris has lured Girder to STAR Labs, and Cisco has created some electromagnets in the hope that it will wipe him like a hard drive and the damage received in the explosion will be undone. The magnets short out before the job is done and Girder keeps on coming.

The team lock themselves into the chamber, with Jesse still unconscious. It's the only room designed not to be breached, and there's nothing in the room that can help them if he manages to get through that door. Henry tells them that they need Barry, and they agree to give it another try. Henry asks if anyone else can be visible to Barry alongside Cisco and Harry tells him it should be possible. Iris steps in and says that she wants to do it, and if anyone can bring Barry back it'll be her!

Barry is still running and has made it back to his family home. He goes in, and this time it's his mother Nora waiting for him. Not fair, speed force! Barry is torn between being pleased to see her, and not fooled that she's real. Barry tells her that he hasn't accepted her death, and he never will. She tells him he has to find a way, that what he has become is a miracle, but it won't stop bad things happening from him. Even the Flash can't outrun what the Universe sends his way, and he needs to accept that. Then he can truly run free.

Barry and his mother sit and she asks if he remembers his favourite book, The Runaway Dinosaur. It's a book about a mother's love for her child, and her love enduring for him no matter what. Barry remembers the book, and quotes it word for word to her. She tells him that he's ready, and Barry steps forward. He closes his eyes and concentrates. The shadow runs into the room, and Barry puts his hand out and grabs it. It's Barry, as The Flash. He's caught his speed force, and The Flash is back.

Cisco fires up the machine and Iris grabs his hand. They enter the vortex, and Barry is waiting on the other side. He sees Iris and his faces lights up, he turns his mother and she tells him to run. Iris calls to Barry and they reach for each other across the void. Their hands meet, and they both grab on for dear life. She pulls him back through, and there's hugs all round.

Cisco tells Barry he's so glad he's back, because they're about to die. Talk about a short lived reunion. Cisco very quickly explains the situation, and Barry tells them he'll lure Girder back to the lab where they will work out how to get the power back to the electromagnets. He grabs Iris, and races out with her, telling Girder to come and get them.

They get to the lab, but Harry and Cisco aren't ready. Maybe a longer extension cord? Barry zips around trying to distract Girder when he arrives, but there's only so much he can do against that super strength. Barry starts to run rings around him, confusing him, and charging up the magnets at the same time. They do their thing and Girder's power is gone, and he drops to the floor.

Jesse still hasn't woken, and Barry goes to see her. He takes Jesse's hand, and a charge runs from his hand to hers. She wakes, and she seems to be glowing from the inside. They all look at him like, yer a wizard Barry! Harry recognises it as the speed force, seems Barry is even more special than before.

Henry checks Barry out, and Barry tells him that he's starting to come around to his father's way of thinking about fate. Maybe he was wrong, and everything that has happened to them has made them who they are and he doesn't think he would change any of it. Henry tells him that it makes perfect sense, and that he's decided to stay with Barry in Central City.

Barry goes to visit his mother's grave for real, and leaves flowers and a copy of The Runaway Dinosaur. Iris is with him and he asks if she knows the book. She does, but never really liked it. Her mother was nothing like the mother in that book, she wasn't there for her. And neither was Barry's, they never had anyone who was just right for them. Barry tells her she's wrong, and he's wasted so much time being angry about things that have happened and what he's lost. He lost sight of what he had, his dad, Joe, and Iris. He tells her he doesn't know what is next for them, but she has always been his everything. He kisses her, ON THE CHEEK, and they hug. WHAT THE HELL BARRY.

Zoom is still prowling around the CCPD and he is giving Caitlin an ultimatum. Stay with him for the next part of his plan, or leave and face the same wrath he has prepared for her friends. If she leaves, he will show no mercy. He heads out on to the balcony, and looks down upon his new followers. There's a crowd of meta-humans, and they rise to his call to arms. There's a new world that is theirs for the taking, and only humans standing in their way.

That was a really sweet episode, a bit of an explanation on the speed force, and some really nice moments for Barry. The highlight of course being the conversation with his mother, closely followed by his moments with Iris. I'm still not feeling that kiss on the cheek. Kevin Smith was all over this one, and it worked well. His love of comic books really shone through, and we saw Barry make his first proper superhero pose.

It was really nicely shot, the speed force scenes having a grainy, sepia tone to them. There was also a bit more humour than normal, and Cisco and Harry made a particularly comical team. Iris was much more forward and kick ass than she has been lately, it was nice to see her have more to do. Loved it, but let's kick up the action from now on in. Barry's back and he has work to do.  Katie Cassidy is also back in her Earth-2 guise next week, the baddie Black Siren!