Okay, it's been a month, let's see if the finale of Top Chef aged like a fine wine or AAA steak! Rolling S15:E14 after the break.

Who will win the ultimate title of Top Chef season 15? Will it be Chicago's Joseph Flamm or Chicago's Adrienne Cheatham? ChiTown Throwdown, son!

Joseph calls his partner Tony Mantuano, who believes Joe's got this deep down inside. I do love this one piece of advice: never change a dish once you've started it. 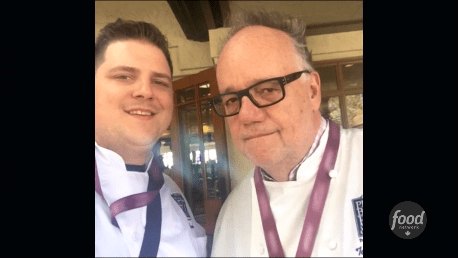 I was picturing Pacino and I got Paulie Walnuts but I was still in the same ballpark, capiche?

Adrienne is walking down memory lane herself, her dad was a Black Panther and her mom taught her about work ethic, Adrienne could be unstoppable. She's certainly surprised me by ending up in the top two, she mostly flew under the radar until the last 3 or 4 episodes.

Host Padma Lakshmi and head judge Tom Colicchio are waiting for the cheftestants at the top of Little Nell in Aspen. Awesome view! Now it's time to cook a four course progressive meal and knock everyone's socks off, yo!

They're gonna get some help, though! Out come all the former contestants. Man, I would not want to hang around waiting to see if I got chosen or compete for the eleventy thousandth time in Last Chance Kitchen. Do they have to sign up for this? Do they getta go home in between? I see Brother Luck, Bruce Kalman, Carrie Baird, Fatima Ali, Tanya Holland, Jose Sasto III, Chris Scott: hai guys!

It's been so long I don't even remember all these people!

Awww, Adrienne gets first pick and she chooses my fave Chris Scott and then Carrie, which is...odd. In the meantime, Joseph picks Joe Sasto III and COME ON! I finally could just put "Joe" but now I gotta use last names again: FINE. Joseph also picks Fatima Ali so I forgive him because I love her.

The other Hunger Games contestants slink back to the safe house.

Whole Foods time! $500 so half an heirloom parsnip and 6 oz of extruded gluten-free sausage.

Joseph even buys the rest of Adrienne's food for her with his excess, awwww! He's such a nice guy, and not in the "But I'm a Nice Guy!" way! I love it.

Perhaps I'm reading too much into things, but Carrie and Sasto III's energy seems super low and sulky. Chris is just happy to be there.

Oh and now they're hurting an octopus. NOT WATCHING

Carrie, who has never made grits before, is making the grits because of course she is. She's terrified!

Adrienne is making her own fancy stuff: tweels. or Tweals. I think she's just making it up anyway, so I'll spell it however I want! It's a fancy lacy garnish that isn't working for her in the pan.

They only have one more minute and Joseph's team remembers they have to press the ricotta for his cakes. He makes it with one second to spare.

Everyone gets a surprise when they get back to the swank Top Chef pad, there's Tom Colicchio cooking for them! I love watching him cook with his little tiny glasses at the end of his nose muttering to himself. He's joined by Graham Elliot, who used to exactly be my type but I've moved on. You're still awesome, Graham. Now Tom is my speed, check out this silver fox.

Sorry, sorry, they eat and talk about inspiration and Adrienne getting some investors for the restaurant she wants to open, it's very relaxed and fun.

The next morning, Adrienne finds her zen in calling her boss chef Eric Ripert who I know from....he's friends with Anthony Bourdain and everyone was worried he was part of #MeToo! That's how I know of him! But it turned out that was about Mario Batali, who sent out a cinnamon roll recipe with his apology letter because of course he did.

We're cooking at the finale! At 11 thousand feet!

Well, not you and I.

Adrienne is all set, I love seeing her so chill yet energized.

Chef Ripert was able to help her fix her tweels, all better!

Fatima struggles with her dessert, nothing is working properly at this elevation. 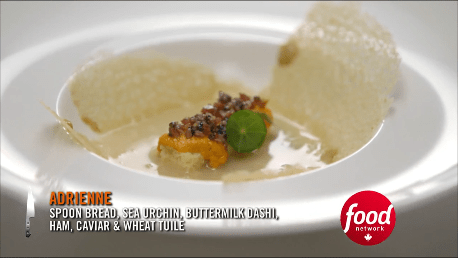 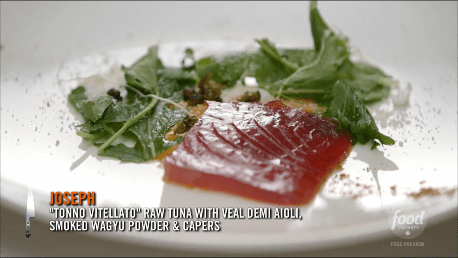 Joe gets most of the praise, but Graham likes the under-the-skirt peek. 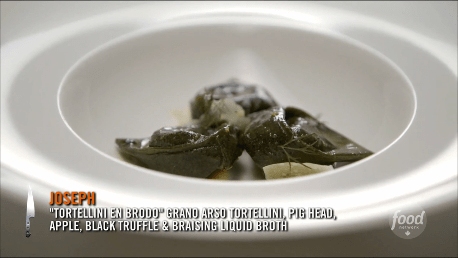 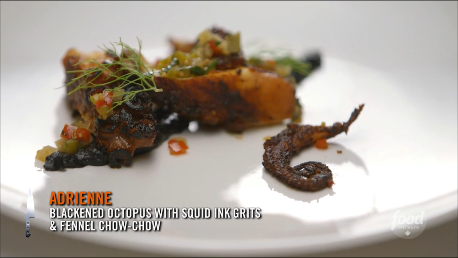 OCTOPUS. Tom is almost speechless, he can't believe how fantastic this food is. Again: Joe gets most of the praise. 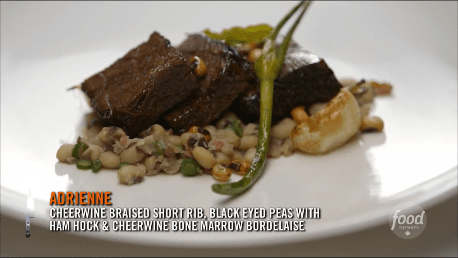 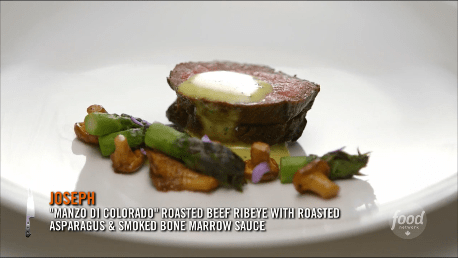 Joe's asparagus was amazing but his ribeye was awful. Adrienne's dish was dry again, mashing half of the black-eye peas was not a great choice. 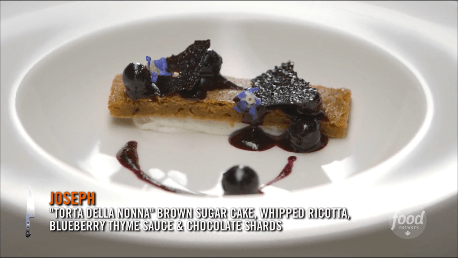 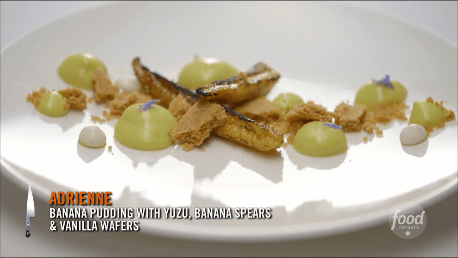 There are mixed reviews for the dessert, but it's nitpicking because everything has been fantastic tonight.

The chefs are called back in for critiques and I'm CONFUSED. Joe gets a lot of kudos for his opening dish

But Padma says Adrienne's starter was the best dish she's had on Top Chef ever. Why come that didn't come up in the initial tasting?

The second course was Joe's and his pig's head broth around his fancy river-rock looking handmade pasta. On and on we go, the chefs are super supportive of each other and then they're excused so they can drink in the back while the judges talk everything over.

One last time with everyone in attendance, hai season 15 chefs, all of you! Hey, did whatsherpickle have her bebeh? I'M LOOKING.

Time to find out who wins Top Chef Season 15 and it is Joseph Flamm! Congrats Chicago Joe!!

I maybe cried with Adrienne, she was excited about the food but LOST, so yeah. Maybe some tears. Joe's hair got even bigger then he called his wife, awww!

Until next time, everyone! Cheers and lacy tweals to you all!