This is it! This is the finale of Below Deck Mediterranean, all we'll see of these crew until the inevitable reunion show and Bravolebrity circuit showboating. Are you ready? Are you ready to say 'goodbye' and 'what was that?' and 'ooooh that's going to be hard to explain'?? Rolling into my recap of Below Deck Med S6:E17 Nothing Comes Over Easy after the break!

So it's the last day of the last charter of the season, why has chef Mat Shea forgotten how to cook eggs? Eggs are the easiest thing ever, how is he killing one after another?? Chief steward Katie Flood blames it on stress but she'll need to explain to me how stress makes you unable to spray eight of your pans with oil, over and over. I would call it painful if it wasn't so nonsensical.

The guests ask for toasted bagels, maybe that can salvage breakfast. Our guests:

Michael Eaves, Crystal Eaves, Terrence Williams, Deborah Jo Winans, Ronnie Lott and Janeiro Lott round out our group AND: Jemele Hill was lovely and retweeted my gif of their #YWB moment:

I need this gif https://t.co/GCaYBZgmby

So I will forever be grateful and they can do no wrong. NO WRONG.

They're definitely being more demanding than the last charter and GOOD. It's not that I want to see our tiny crew fail, it's that they deserve to have every single amenity they are paying for. Like the beach picnic planned for today at 2:30, yay!

Mat does not feel yay about the beach picnic.

Katie only has one other steward, that's Courtney Veale who is running all over, when some guests head to the water toys and some head to the hot tub, there's not enough bodies to serve drinks. Guest Deborah has to go find someone and that's just not good service.

Katie tries to keep up, but Courtney is off with bosun Malia White setting up for the beach picnic in this insane location: 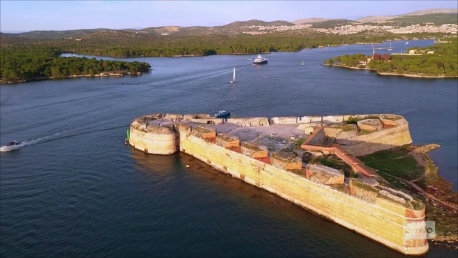 And a very needy chef wants all Katie's attention and input. Yesterday Mat got his first real bad feedback of this charter season and has been spiraling ever since.

For some reason, Malia is sending the guests over to the picnic before the food, which accelerates the food timeline which ratchets up Mat's anxiety jusssst that much more. Malia decides to send deckhand David Pascoe as a reward, he's redeemed himself after working hurt for a couple of charters and not stepping up to her expectations. Apparently.

So the food's not there. A stew is, and David's on his way with the food but back on the Lady Michelle the wind has come up and she's dragging anchor. That means everyone needs to work super hard all of a sudden to get the superyacht ready to move; again, understaffed while doing so.

Captain Sandy Yawn sends deckhand Lloyd Spencer off by himself with the detached Nauti-Boys (kind of a floating deck?) and jetskis, jaysus. That just doesn't look safe but I suppose everyone knows what they're doing? 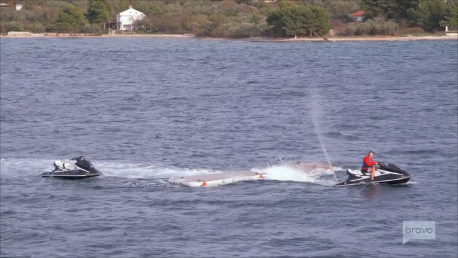 Oh no. Katie tells the guests to come and get lunch, like they're at a buffet. Like they're at a dollar store yachting buffet and this is not what they're paying for. Show me ONE charter who had guests get up out of their seats at a beach picnic and have them walk over to fill their own plates.

Why would Katie do that?? Primary Jemele says it's fabulous but I'm still mad they had to line up like cattle when every single other charter got served in their seats that I'm just not gonna let it go.

Courtney lays on the floor in the laundry room to calm down our spinning chef;  Mat is trying to regroup but it feels to him as though every minor setback is a confirmation that he's not a chef or some such.

I forget sometimes that Mzi 'Zee' Dempers is still quite new to yachting; he's been doing great but has never even driven the tender, so David lets him.

I was skeptical of David in the beginning, he seemed like your basic generic yachting fratboy and that's what I get for judging a book by its cover. He's just a lovely person, funny, hardworking, always with the help and compassion and self-deprecating humour. You're a great person, David, and I am glad to have known the little bit we saw of you on screen this season.

The guests chill in the hot tub while Zee and David clean up the beach picnic and Mat freaks out in the galley over and over. I can't believe he hasn't decided on this meal yet, he keeps asking Katie what he should serve and she's just too fried to help direct him. She's contemplating another 4 am party night ahead of her.

Did we mention she had four stews at one point and went down to half that voluntarily? Only every other recap, so I'll leave it for the finale. She already knows this was not the best decision ever.

The guests dress for dinner as Mat finally settles on salmon for supper, lookit guest Ronnie Lott and his hoodie/scarf combo.

Lloyd sneaks into the bridge to use Hot Chief Officer Marten's computer to do up a Thank You card for Malia, who notices his absence and goes looking for him. David makes up an excuse that Lloyd is working on his resume (Lloyd is very, very worried about finding his next job, so that's a decent explanation) which irritates Malia as work on THIS job hasn't been yet done.

Okay, we're all nervous about this supper service, this trip is Primary Ian and Primary Jemele's first wedding anniversary and they need fireworks for their final dinner. Given how shaky Mat has been thus far this charter: worried. Every course is going to be anxious, but the spicy shrimp tempura goes over very well!

It;s all awesome, best meal of the charter!

Up in the bridge, Malia suggests to Marten that he use Lloyd for the upcoming crossing, and he offers Lloyd the job. Lloyd is over the moon, he was so worried about finding another awesome workplace and this just saved his brain from the hamster wheel it's been running the past two charters.

Hm. He and Mat both had a lot of anxiety, I'll have to think why I was so much more sympathetic to he than Mat.

Look how cute Marten is? 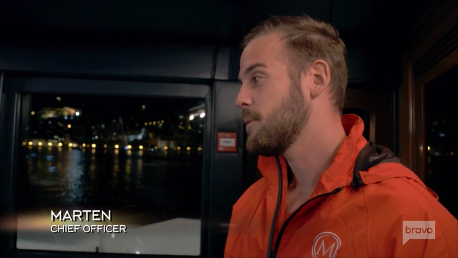 The whole crew is planning to get a house together in Split, erm, why? They just spent all this time together, don't y'all need a break from each other??

It's 11 before supper is done, Katie knows she's got a long night of slinging drinks ahead of her so she grins and bears it as the guests squeeze every last bit of enjoyment out of the charter they paid for with their own money.

I was just thinking back to the original Below Deck and some of the guests they had on there (remember Dean??), there used to be a notation that guests received a discount because they were filmed and I wonder if that's still a thing. I bet it's not, though, so many guests have used this as a promotional launch vehicle.

The guests hit the hot tub at 2 am, Katie is now 19 hours without a break. Then it's 4:30 am and the guests head to bed and Katie cheers.

90 minutes later, the morning shift is up and we're going to have an awesome last meal! 90 minutes after that, so 7:30 in the morning, the guests are up and asking Courtney for Bloody Mary's. I don't know how to make those either, Court, thank god for Google!

The anchor is lifted once again and French Toast is flying! Let's get this charter season DONE!

This is definitely the smoothest docking we've ever had this season on Below Deck Med, time to disembark! Courtney went from the laundry room to doing a breakfast service entirely on her own, she really did earn those two stripes!

We maybe kinda thought Katie gave them to her because she asked and Katie is not good at hard decisions. But NO!

Guest departure goes fast, Primary Jemele thanks the crew, Primary Ian hands over the not-so-fat tip envelope. How much is it?? Lemme guess...long charter, okay service, decent if not amazing food...locking it in at $24,000 USD to end this season properly!

Everyone is so tired in the salon, we all cry with Captain Sandy as she does the last Tip Meeting, even if we don't want to because it's the LAST and we're EMOSH.

Okay. It's $20,000 but that's still a high tip because there are so few of them: $1,818 USD each.That's more than I make in a month, whose laughing now, getting drunk off their arses and having a good time making bank while I sit in my chair listening to my snoring pug??

Time to turn over the boat for the very last time! Everyone knocks off at 6:30 to get ready to go out, haaiiiii Chef Luka!

Mat acts so weird, he bolts, what? The season is over! We never even got to see his food! Aw a quick visit and he's gone, booo. He clearly was working out in quarantine.

Captain Sandy came out for the last supper and everything! She calls them the best crew she'd ever worked with, awww. So many speeches! We get to hear everyone's highs and lows, Mat features heavily in both.

David gets kudos for his leadership and quiet and excellent work ethic. I had no idea people were so drunk already but there are some hard falls back on the boat and not just Zee. Then there's the crew mess.

It's a super groggy morning, only Malia is up and ready to go. A cab is coming to get them at 10:30 to take them to Split!

The crew says goodbye to Sandy one at a time, see youuuuuu!

Zee and Lloyd are lovely, though, aren't they? I think they did great, they did a big card for Malia and she couldn't be happier. The whole ending was completely anti-climatic, though, wasn't it? Random

I wonder what's going on with the supposed sex party in Split? What? We don't find out and I bet that's why there weren't many hookups this season: save it for off-camera, you legends! Good job!!

Until next season or next franchise everyone, thanks so much for reading along! Cheers!