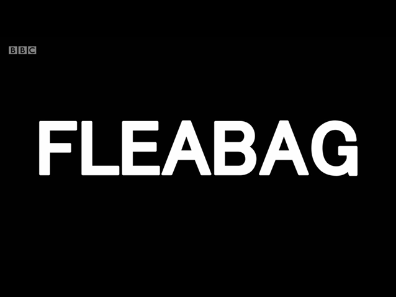 We're back for the penultimate installment of BBC3's Fleabag, I swear, I'm seeing Phoebe Waller-Bridge everywhere these days! Rolling E5 after the break.

Flea's getting a breast exam, everyone being adults and all but Flea does what I do and tries too hard to be polite and enthusiastic

The doctor saw Claire this morning, how is she?? I'm surprised that he would tell a patient about another patient's appointment, but since their dad books these for them both (like mani-pedi sessions), maybe that's just how doctor - patient privilege works in England.

She tries to lighten the mood further (it's like we're TWINS!); there are worse jobs, yeah? He shuts her down with a speech about checking for "cancerous lumps in mammary glands" and all he gets off to is maybe saving her life. Flea is suitably chastised.

Claire is waiting for late Flea; it's their mom's memorial lunch.

Godmother answers the door, takes Claire's flowers (fressias, which were a favourite of their mother's) and carefully leaves them outside on the step. All with polite murmurings and not a hint of aggression, you have to hand it to that kind of master.

A buzzing sound can be heard in the background; Dad is cutting down the tree so (very expensive Felicity) can't get out. She looks like a lovely kitty

Another small act, it's the subtlety that gets you, honestly. Godmother (to Flea): oh that looks nice. Godmother (to Claire): oh this is BEAUUUUUTIFUL 3 seconds later. Godmother is sorry to be there; her Pilates class fell through, "sad day, sad day" then

The women are all gathered in the dayroom in charged silence; who will crack first? Claire! And these types of conversations aren't as much fun as when it's just Godmother and Flea, they really go for it. The threeway conversation between three people who hate each other but have to get along is mostly just sad and draining. Cue weird canapes and Dad!

He thinks they're both looking very healthy, healthy, yeah Dr. Samuels gave good...feedback on his ... daughters. He's going to say a few words about their mother, while Godmother makes the most noise possible in the background.

I suppose if it was anyone else, I'd be sympathetic to someone coming into a solid unit of three that mourn the loss of their wife or mother, but Godmother doesn't seem like the type to be looking for sympathy. Just spots to dig the knife in.

Flea notices the plaits in Claire's hair (I've been pronouncing that wrong my whole life! I thought that was PLATES, not plats); it must be around her period or as their mum called it: Claire's Monthly Confidence Crisis. Claire has PMT and it leads to her trying to reinvent herself in small or large ways. Like this

Claire's brought back the statue; she wants them to put it back, no harm no foul. They sneak up to Godmother's studio, Claire keeps forgetting how talented Godmother is. Flea asks about Martin and if Claire's getting her period, and sometimes I have to remind myself that I'm not watching teenagers. Flea wonders if Godmother has ever painted their dad naked and Claire thinks Flea should keep her nose out of other people's marriages. Ooooh. Sister burn.

You forget, you know, when you've known someone your whole life and you're used to taking the piss out of them. You forget that you haven't known their spouses as long or as well and a relationship forms a bubble around a couple that forever locks off a piece to family and friends. So Flea thinks she's teasing her sister, Claire thinks Flea's intruding and they're both right.

Godmother finds them at it in the studio, Claire was just looking for the loo, *sweeping glance to Flea* er-ooh and so was Flea and Godmother will escort Claire to the loo now.

Olivia Colman needs all the kudos for this beautiful ninja-like display of passive aggressive behaviour. You know, since it's not actually HAPPENING to me.

Flea surprises her dad in the kitchen. He hates being alone with her. It's almost painful to watch if it wasn't hilarious as well. He asks about the cafe, the lease is up in two days and that will be the end of that, she hasn't the money to carry on. Oh he'd love to help out, but things are a little tight in the purse strings, they haven't been buying anything lately.

He wants to talk about to her about the exhibition coming up...then they drop a tray of food and I'm starting to get concerned. He's frantic with worry that "she'll" find out or see that they dropped food. Flea pops a canape into her mouth "five second rule!" He's never believed in that rule, he...then he pops one into his mouth and they grin at each other. It's another nice moment ruined by Godmother's entrance.

The men are here! Or rather, man, Arsehole Man is there for Flea to show off. Godmother practically droooools all over him until he goes to the loo, well, sort of, he does a couple of drive-bys before leaving for reals.

About this exhibition now! It's a Sexhibition, a journey through Godmother's sexual history, climaxing with a series of pieces molded on their father. There are photos and I can't think of anything more inappropriate as far as telling someone's daughters about how sexual their parent is, nobody needs that in their heads. I had a weird flash there and I hope I'm wrong so I'm not even going to say anything.

Flea tells everyone about Claire's promotion, directly against Claire's wishes. Claire is furious, finally spilling: she can't go to Finland and leave her weird stepson and broken sister and oh, it was for Flea. Oh.

Flea flashes back to Boo helping her fight herself for being so terrible to Claire, she just can't help herself. Felicity scratches at the door; two refugees cuddle for a minute and then Flea frees Felicity, yay!! Go Felicity GO!

I cannot be the only one dying for this memorial lunch to be over.

Godmother and Flea have one last showdown in the hallway, it starts with an awkward silence and reference to the statue as usual, but Godmother's comment about her mother is the very last straw on Flea's back. She pushes Godmother, who returns with a crackling slap across the face just as Dad comes up the hallway.

Everyone pretends it didn't happen. One entire half of Flea's face is in the shape of a red handprint and three people saw it and nobody says ANYTHING.

Claire has a "dicky" tummy so she's leaving and so of course is Flea, so they pile out to stand on the step waving at each other in a completely non-awkward way. There's another showdown between Flea and Godmother, oh yes, Flea WILL be at the Sexhibition and then "very good looking, very good looking" Arsehole Guy comes out and draws the attention away.

He's so happy to have spent an afternoon with a normal family, he feels quite emotional. The worst part is that he's probably right. He gets his motorcycle ready while Claire takes Flea aside.

Claire is leaving Martin, giving Flea money for the cafe and going to Finland. YAY!! And then, and THEN, and then she takes out the statue they already returned as noted to Godmother. "That is the coolest thing you've ever done" and Flea and Claire finally work out how to hug each other. We're oot to Flea motoring away on the back of Arsehole Guy's motorcycle as Felicity makes good on her escape.

I have no idea why, I cried silently all the way through the back half of that episode. There is so much hatred and sadness and frustration and exhaustion in those scenes but all they did was have lunch! There was a surge of exultation when Flea slapped Godmother, followed shortly by shock and then more sadness.

Until next time, when we go to Godmother's Sexhibition, and I have to mention, that was the only part that was a little...off to me. I love Olivia Colman, and I love her in this role, but she isn't coming across as a sexually fluid artist whatsoever. That may be just me, however! Cheers!